The working draft of Rep. Rufus Rodriguez, chair of the House ad hoc committee on the BBL, strips the proposed Bangsamoro government of several key powers, including control of the autonomous region's police through a board.

A member of the ad hoc committee allowed ABS-CBNnews.com to see the Rodriguez draft and an earlier version that listed inputs from legislators.

The chairman’s draft, backed by many committee members, wrests back for the national government several functions reserved by the original draft for the autonomous regional government.

Rodriguez and other legislators who submitted amendments to House Bill 4994 also highlight at every turn the supremacy of the state on matters of territory.

One of the key provisions deleted from the chairman’s draft is an opt-in provision.

Critics claim it would allow the “creeping expansion” of the Bangsamoro autonomous region, by allowing neighboring communities to conduct a plebiscite once more than 10% of a local voting population signs a petition.

Many of the amendments try to secure and protect the rights of non-Moro residents, including indigenous peoples and women, in the proposed Bangsamoro autonomous region. 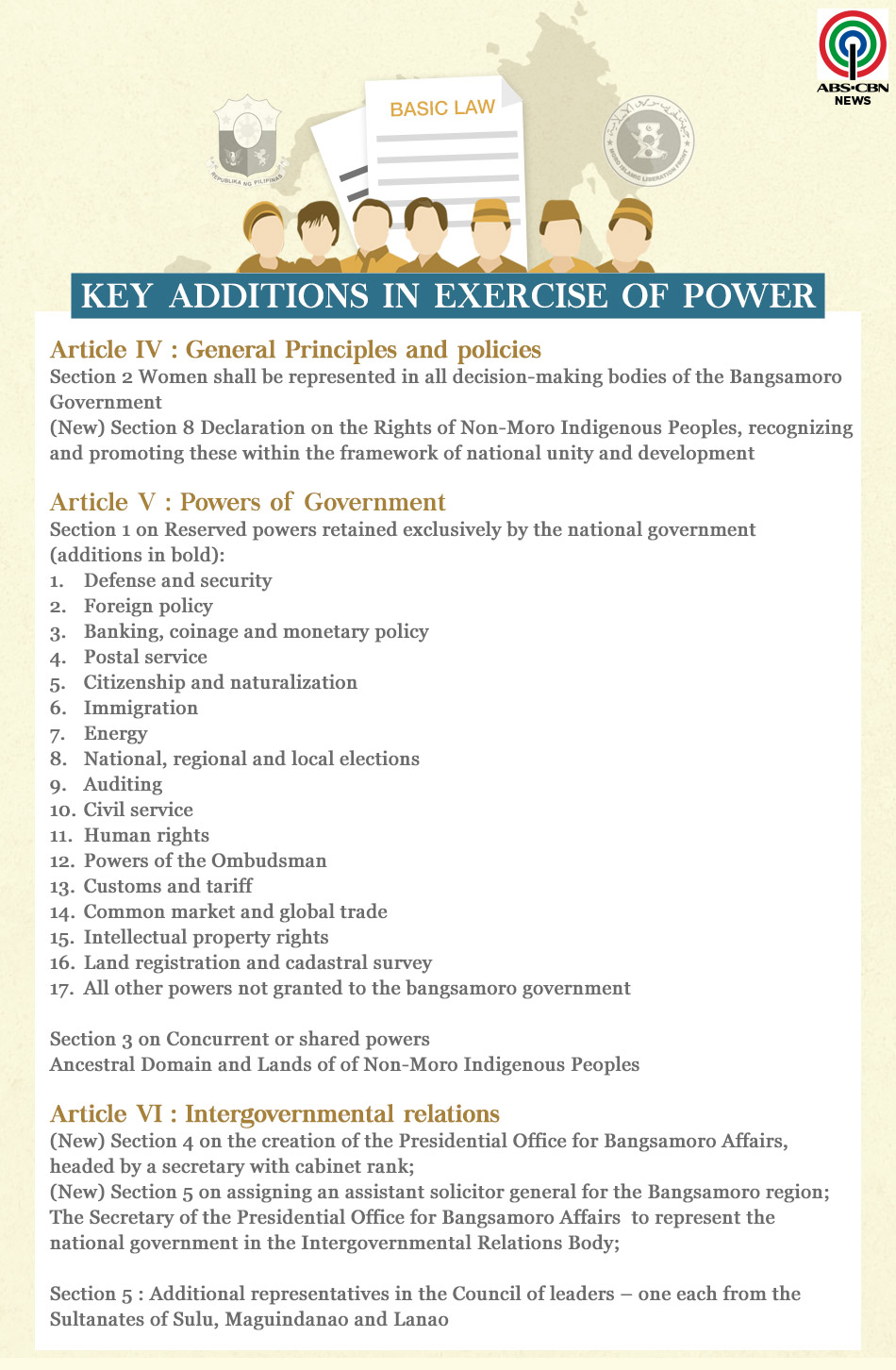 A citizens’ peace council invited by Malacanang to review the BBL draft has called it “overwhelmingly acceptable,” except for a few passages that needed rewording.
Read: Report of the Peace Council on the Bangsamoro Basic Law

The peace council filtered its findings through the lens of a specific worldview:
(1) passing a law that creates an autonomous region is in fact required by the Constitution;
(2) passing a law for the autonomous region is aimed at correcting past injustices and at addressing social, political and economic problems the region is facing at present, which should not be postponed;
(3) autonomy, as contained in the Constitution, is unique and unlike any other local government unit, and should therefore be seen in such light;
(4) the BBL is unlike any other form of law as it is an Organic Act and contains the agreements reached from years of negotiations; and,
(5) a liberal interpretation of the Constitution is needed if its requirement for the establishment of a genuine regional autonomy is to be realized./

Critics are not buying.

Rodriguez, in an interview with ABS-CBNnews.com, said only the deletion of several provisions could save the draft law from ending up as unconstitutional.

“I believe no amount of modifying the language may save it from unconstitutionality. I am for deletion of eight provisions that I believe will conflict with the Constitution, and will dilute and interfere with the powers of independent constitutional bodies.”

“They seem ready to compromise on many areas, but say the Bangsamoro Police is non-negotiable,” said the legislator, a former cop.

The chairman’s working draft, however, targets Article XI, on Public Safety and Security.

It also places “security,” and not just “external security,” among the powers reserved for the national government and blocks the option of creating a military Bangsamoro Command.

The draft junks the establishment of “coordination protocols” that would govern the movement of the Armed Forces of the Philippines (AFP) in the Bangsamoro region.

The Chief Minister of the autonomous region will not unilaterally choose the head of the regional police, but pick from a list of three names submitted by the national police chief.

Instead of the Chief Minister disciplining and imposing penalties on erring Bangsmoro Police, it is the Regional Police Commission that will probe allegations of wrongdoing and recommend sanctions. 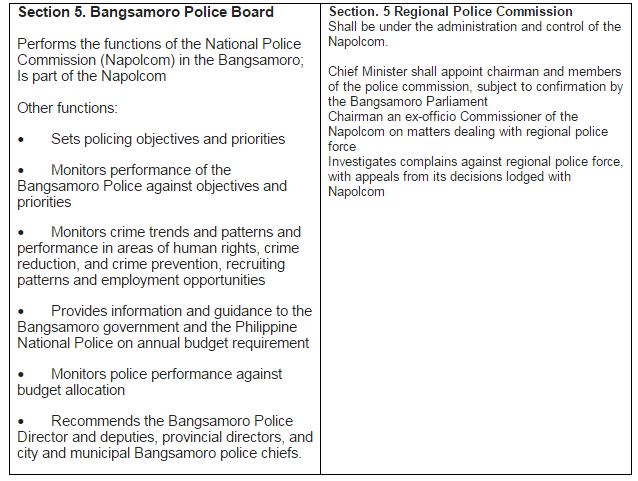 Performs the functions of the National Police Commission (Napolcom) in the Bangsamoro;
Is part of the Napolcom

· Monitors performance of the Bangsamoro Police against objectives and priorities

Shall be under the administration and control of the Napolcom.

Chief Minister shall appoint chairman and members of the police commission, subject to confirmation by the Bangsamoro Parliament

Investigates complains against regional police force, with appeals from its decisions lodged with Napolcom

Rodriguez said he cannot guarantee all his proposed amendments.

“The majority coalition is really strong. It has a lot of members,” the ad hoc committee chairman said. But he said leaders of the House are not about to force a party vote and would allow individual coalition members to vote according to conscience.
Congressional critics of the BBL claim it is trying to establish an entity with near substate status because of the breadth of powers granted the regional government.

After plenty of protests, the chairman’s working draft has removed the following from the list of concurrent or shared powers: auditing, civil service, human rights, land registration, and cadastral survey.
It has removed the regional government’s authority to regulate power generation, transmission and distribution, and assist electric cooperatives in accessing funds and technology.

The regional government will not be able to create Bangsamoro settlements. It cannot solely oversee the rights of indigenous peoples or recognize constructive or traditional possession of their lands.
Government peace negotiators say extraneous issues linked to the Mamasapano incident have affected the prospects of the BBL.

In the aftermath of Mamasapano, however, the executive department has bowed to congressional allies’ moves to water down the measure.

The executive branch and leaders of Congress say the law for the creation of a new Bangsamoro autonomous region will be passed before President Benigno Simeon Aquino III steps down from office in 2016.

What kind of Bangsamoro Basic Law will survive Congress, however, is a question that hangs over communities that have seen 150,000 lives P700 billion worth of private and public property lost to conflict, and encouraged the spread of radical groups. 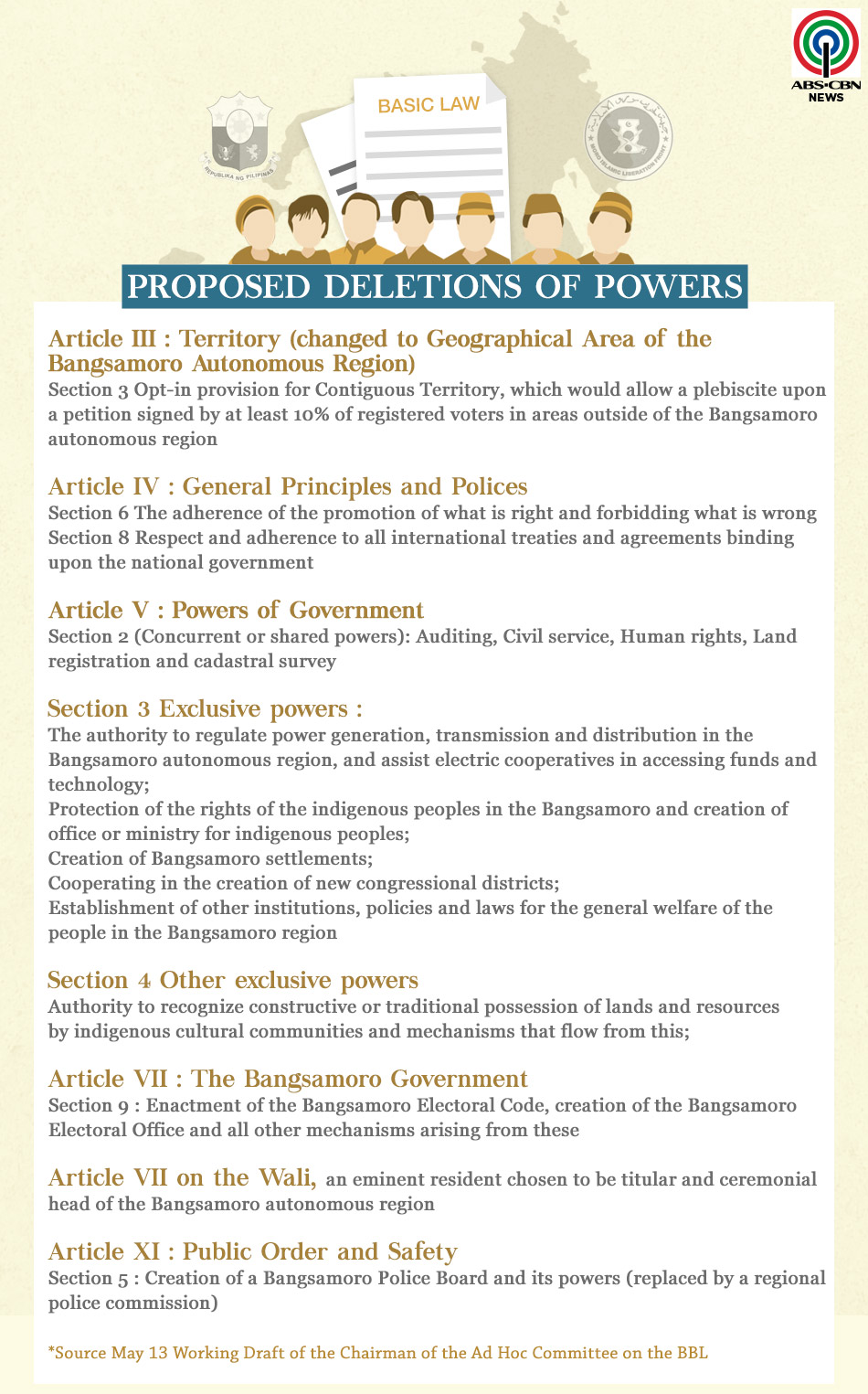 Posted by Retired Analyst at 11:34 PM