Sulu vs Abu Sayyaf on beheading threat: Who will blink?

From Rappler (Oct 16): Sulu vs Abu Sayyaf on beheading threat: Who will blink? 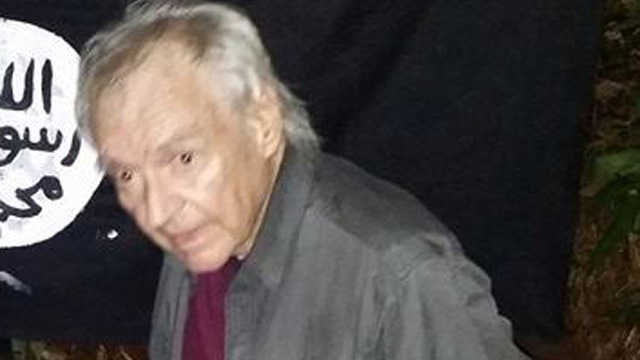 PRESSURE. The Abu Sayyaf released this photo of German hostage Stefan Viktor Okonek on Wednesday, October 15, 2014, as it stepped up its pressure on the government to yield to its demands.
The Sulu provincial government is "closely monitoring the deadline" set by the Abu Sayyaf for authorities to comply with its demands for the release of a German hostage, a local official said.
Sulu public information officer Sonny Abing III made the statement as the local Crisis Management Committee (CMC) divided inself into subgroups per municipality to "contain" information on all possible movements of the group.

The CMC, which includes all town mayors, made the decision to ensure that any information obtained on the Abu Sayyaf and the hostages would not be leaked, so as not to compromise any possible government response that it may recommend to military and police authorities.

The Special Action Committee was also created, composed of the governor as chairman, the vice governor, the mayor of the local government unit involved, the poilce, the military, the religious sector, and the prosecutors' office.


The Abu Sayyaf has threatened to behead 71-year-old German hostage Stefan Viktor Okonek at 3 pm on Friday, October 17, unless they get a P250-million ($5.58 million*) ransom payment and Germany withdraws from the US-led war against the Islamic State (ISIS) in the Middle East. (READ: 2 days before deadline, Abu Sayyaf steps up pressure on German hostages)
Okonek has been separated from the other German hostage, 55-year-old Henrike Dielen. They were taken by the Abu Sayyaf in April 2014 while they were on board a yacht off Palawan. Little was heard about them until the Abu Sayyaf issued the threat to behead Okonek.

The military and the police have declared they are ready for a rescue mission. Their commanders have been attending daily meetings in the provincial capitol to monitor the situation.

If and when the situation calls for it, Sulu Governor Totoh Tan II will order a "focused, selected operation."

The military said it prefers the release of the hostages without a firefight, but in statements to the media and in talks inside the capitol, the military declared they are ready for a rescue mission.

Armed Forces chief General Gregorio Catapang Jr himself arrived in Sulu on Sunday, October 12. Philippine National Police chief Director General Alan Purisma was also there on Tuesday, October 14, to meet with local leaders and to inspect the readiness of the local cops.

"We are prepared to conduct rescue. We are just awaiting orders," Catapang reiterated in an interview in Manila on Wednesday, October 15.

The military has chosen to respond to the Abu Sayyaf threat with a counter-threat. It has increased troop presence in Sulu, where there are now up to 2,000 soldiers. There are 5 Marines battalions, two Army battalions, a company of K-9 units, and a hundred of the elite Special Forces ready for deployment.

It's a battle of resolve as the clock ticks to 3 pm, Friday. The Abu Sayyaf also stepped up the pressure on Wednesday, October 15, putting the German hostage on radio via RMN in Zamboanga to air another appeal to authorities.

The Abu Sayyaf also released photos of Okonek sitting in the middle of a freshly dug grave, surrounded by masked men pointing their rifles at him and holding the black flag first identified with the Al-Qaeda and now the ISIS.

Authorities deny there are ongoing negotiations although the the radio interview of Abu Sayyaf spokesperson Abu Rami in the same radio station revealed as much. The Abu Sayyaf, however, seemed unhappy with the talks and expressed its desire to talk with the "administrator" of the Department of Foreign Affairs to facilitate their demands, as the politicians and the cops are "corrupt."

Rami told the same radio station they are serious about beheading Okonek if they do not get what they want.

The government regards the Abu Sayyaf as a kidnap-for-ransom group that is only interested in the ransom they can collect.

The leaders of the Abu Sayyaf, involved in a spate of kidnappings and terrorist activities in Muslim provinces in Mindanao, have pledged allegiance to ISIS. According to the military, they are holding a total of 15 hostages including the Germans.

On July 23, a video of senior Abu Sayyaf leader Isnilon Hapilon along with masked men was posted on YouTube, showing them swearing allegiance or “bay’ah,” an oath, to ISIS and its head, Abu Bakr al-Baghdadi.


Military officials regard the act as mere propaganda. "Nagpapapansin lang (They're only trying to get attention)," said a high-ranking military officer.

The US Rewards for Justice Program has offered a $5-million bounty for the arrest of Hapilon, who was indicted in the District of Columbia for “terrorist acts against United States nationals and other foreign nationals.”


In the radio interview, Rami repeatedly demanded a P250-million ransom for Okonek but mentioned sparingly the other demand to the German government. There was no discussion on ideology.

Aside from the Germans, among the other hostages believed to be with the Abu Sayyaf include European birdwatchers Ewold Horn and Lorenzo Vinciguerra. They were abducted in February 2012.

All four hostages were released, not rescued. In the case of Atyani, the police admitted protracted negotations for ransom although he would later deny that ransom was paid.

http://www.rappler.com/nation/72114-will-abu-sayyaf-blink
Posted by Retired Analyst at 4:52 AM