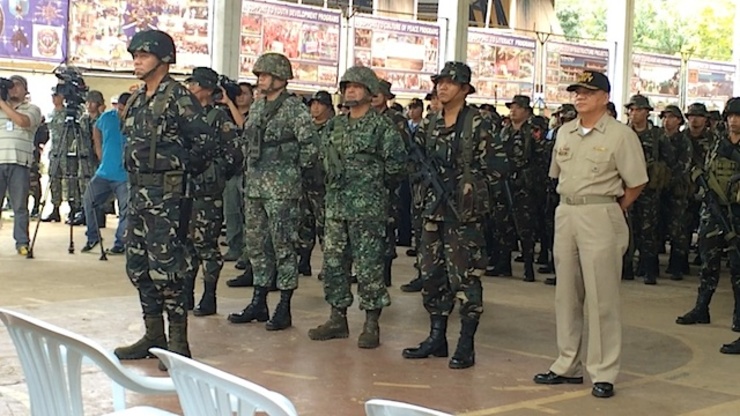 A day before the Abu Sayyaf's deadline, Sulu Governor Abdusakur Tan II on Thursday morning, October 16, ordered the military and the police to prepare for "law enforcement operations" to secure the release of the German hostages.

Armed Forces of the Philippines vice chief of staff Lieutenant General John Bonafos said the plan is to serve specific members of the Abu Sayyaf warrants of arrest and "relatedly rescue" the hostages.

Bonafos explained: "This is a kidnapping activity. This is against the law. We asked for the help of the police so they can launch the law enforcement operations. Those personnel involved in the kidnapping activities were issued warrants of arrests. Through this, there will be an action that will relatedly rescue the hostages."

(We will not be cowed in situations where lawless elements are threatening us. We will continue to implement our capability to establish peace and security in the area.)

The military's island commander Colonel Allan Arrojado said the order is "to start moving and preparing for law enforcement operations," which can happen "anytime."

"In the military point of view, the Abu Sayyaf Group is serious with their threats against German kidnap victims. We have plans already to support the PNP (Philippine National Police) law enforcement operations," Arrojado added.

The Sulu Peace and Order Council created the Special Action Committee (SAC), a smaller unit that is tasked to oversee the law enforcement operations the council has laid out.

The special unit will monitor the deadline and get reports from the field. "The existence of the special unit is only for this particular situation, it is deemed dissolved automatically, once situation is resolved or cease to exist," reads the statement of the Sulu provincial government.

[Video report: Catapang on Abu Sayyaf deadline on Germans
http://www.youtube.com/watch?list=UUdnZdQxYXnbN4uWJg96oGxw&v=feg3lYbcru4
Aside from the Germans, among the other hostages believed to be with the Abu Sayyaf include European birdwatchers Ewold Horn and Lorenzo Vinciguerra. They were abducted in February 2012.

All 4 hostages were released, not rescued. In the case of Atyani, the police admitted protracted negotations for ransom although he would later deny that ransom was paid.

The last high-profile rescue operation launched against the Abu Sayyaf was in 2002. American missionary Gracia Burnham was rescued but her husband Martin died in the firefight.

http://www.rappler.com/nation/72209-sulu-german-hostages-rescue-operations
Posted by Retired Analyst at 4:44 AM