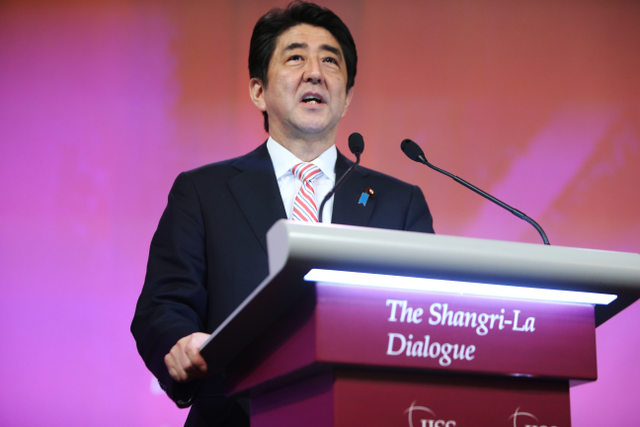 SHINZO ABE. Japanese Prime Minister Shinzo Abe gives the keynote address at The International Institute for Strategic Studies (IISS) 13th Asia Security Summit in Singapore, May 30, 2014. How Hwee Young/EPA
Japan on Monday, June 2, hit back at China's denouncement of Prime Minister Shinzo Abe's speech at a regional security forum, firing the latest salvo in an ongoing tit-for-tat row.
On Sunday, Lieutenant General Wang Guanzhong, deputy chief of the general staff of the People's Liberation Army, told the Shangri-La dialogue in Singapore that the comments made by Abe and US Defense secretary Chuck Hagel at the conference were "unacceptable."

But Chief Cabinet Secretary Yoshihide Suga told reporters in Tokyo: "We believe the Chinese senior official made claims based on mistake of facts and defamed our country."

Suga said the Japanese delegation in Singapore immediately made a "strong protest" against the remarks to the Chinese side.

On Friday, Abe had opened the forum by urging countries to respect the rule of law – an apparent reference to what rivals consider aggressive Chinese behaviour over disputed areas in the South China Sea and East China Sea.

Hagel on Saturday warned China against "destabilizing actions" in the South China Sea and listed a number of alleged infractions, including against the Philippines and Vietnam, the two most vocal critics of Beijing's claims.

A furious Wang accused the two of coordinating their remarks and encouraging each other to attack China.

In response to the US and Japanese remarks, Wang said in an address to the forum: "The Chinese delegation... have this feeling that the speeches of Mr Abe and Mr Hagel are a provocative action against China."

He added: "The speeches made by Mr Abe and Mr Hagel gave me the impression that they coordinated with each other, they supported each other, they encouraged each other and they took the advantage of speaking first... and staged provocative actions and challenges against China."

Relations between Tokyo and Beijing have fallen to their lowest point for years, with much of the animus focused on disputed islands that Japan administers but China claims.

http://www.rappler.com/world/regions/asia-pacific/59448-japan-china-remarks-spark-row
Posted by Retired Analyst at 6:06 AM