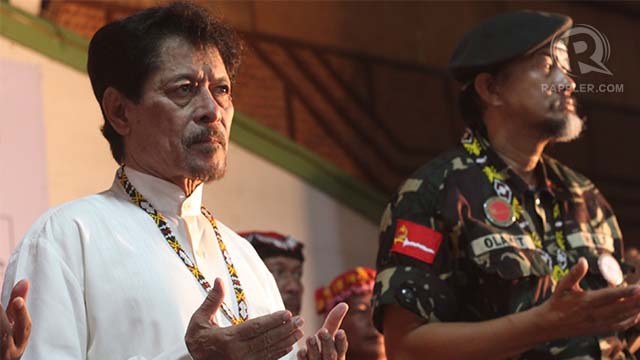 I HAVE NOTHING TO DO WITH IT. MNLF founding chairman Nur Misuari in Davao last Sunday, March 3. Photo by Karlos Manlupig

“It is my message to Malaysian Prime Minister Najjib Razak that I am ready to send my grand-nephew who is his cousin to open up talks,” Misuari told reporters at the celebration of his 71st birthday here on Sunday, March 3.

Misuari said he is also willing to personally go to Malaysia to help end the crisis.
Malaysia has not responded to his offer, Misuari added. But he said he was concerned about the children and women in Lahad Datu who "are now facing starvation and danger."

Misuari also denied allegations he is funding the armed men involved in the Sabah standoff.

Followers of the Sultan of Sulu sailed to Sabah last month to revive the Sabah claim. The Philippine government appealed to them to return home but they refused.

Dr. Samsula Adju, member of the Bangsamoro National People’s Parliament, said the move made by Sultan Jamalul Kiram only shows that the Sabah claim is very much alive.

Misuari had enjoyed good ties with Malaysia in the past as it allowed the MNLF to seek sanctuary in Sabah under the Marcos regime.

But Malaysian security forces also arrested him in Sabah in 2001, after he fled Sulu following a botched revolt in the province. The arrest led to his detention in the Philippines.

http://www.rappler.com/nation/22985-misuari-volunteers-as-sabah-mediator
Posted by Retired Analyst at 6:30 AM