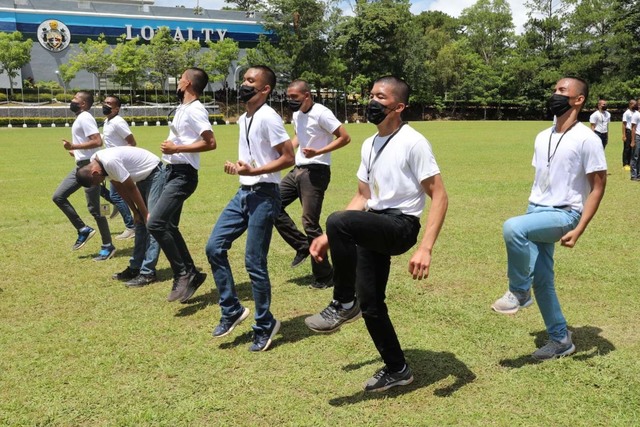 BEAST BARRACKS. The Philippine Military Academy's reception of this year's plebes. Photo from the PMA website.

Upon the recommendation of the Department of National Defense, the Philippine Military Academy (PMA) reopened in June, adopting segregation of classes in billeting by building, mess tables, and study areas.

The distancing is apparently to minimize infection of the novel coronavirus, as well as to prevent hazing.

The schedule of classes has also been spread out so that the different classes would be hardly seeing each other on campus, Brigadier General Romeo Brawner Jr, the PMA commandant of cadets, said on Friday, June 26.

In June, Baguio prosecutors indicted two PMA cadets and 3 academy doctors for murder over the death of Cadet Darwin Dormitorio in September 2019. Dormitorio’s family was were dissatisfied with the resolution that indicted 7 suspects but cleared 7 others. (READ: Police probe shows Dormitorio’s life inside PMA was living hell)

The PMA – including its plebes who just entered the academy and its graduates who just left it – remains COVID-free, Brawner said.

Brawner said the PMA followed Baguio’s initial steps in containing the virus, including holding its alumni homecoming on February 22 without any audience other than the alumni, and graduation rites where even the parents weren’t allowed to attend in May.

He said that in March the PMA implemented the use of face masks and application of physical distancing.

“Right after their graduation, the PMA Class of 2020 were immediately fetched by their respective branches of the armed forces,” he said.

“Fortunately, none of them tested positive,” Brawner said.

The plebes started their Beast Barracks last June 15. Brawner said that those who handled them were mostly the tactical officers and a few of the upperclassmen.