Will the Philippine-US military alliance survive Duterte and Trump?

From the Nikkei Asian Review (Mar 24, 2020): Will the Philippine-US military alliance survive Duterte and Trump? (By CLIFF VENZON) The Visiting Forces Agreement will officially end on Aug. 9. © Illustration by Takahiro Suganum

In mid-March, Philippine and American military officials met at Camp Aguinaldo in Manila to confront the biggest question currently facing their alliance: What to do after Aug. 9?

The date marks the official termination of their Visiting Forces Agreement, 180 days after Manila served the notice of repeal to its lone mutual-defense treaty ally.

"The unilateral abrogation of the VFA has triggered a major crisis in the alliance," said Renato De Castro, a regional security expert and professor at De La Salle University in Manila, during a recent forum on the agreement.


Diplomats and military officials from both countries are finding ways to salvage the vital troop deal, a senior Philippine military official told the Nikkei Asian Review, wary that a security vacuum could create an opening for Beijing's further military buildup and expansion in the South China Sea.

But the latest test in the 70-year-old alliance comes as Philippine President Rodrigo Duterte is increasingly aligning himself with China, while U.S. President Donald Trump is growing reluctant to spend more for Asian allies' security umbrella. 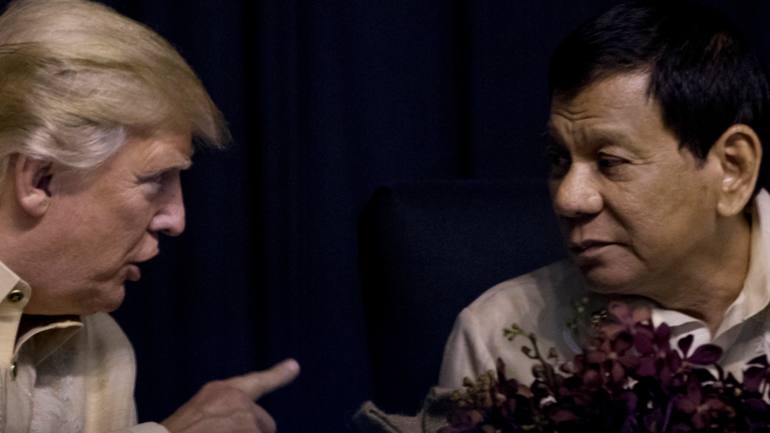 Duterte, enraged by U.S. criticism over his violent anti-narcotics campaign that has killed thousands of suspects, has previously threatened to scrap the VFA. But the cancellation of the U.S. visa of Philippine Senator Rolando dela Rosa, a close friend and political ally of Duterte who led the drug war as police chief in 2016 and 2017, "was the last straw that broke the camel's back," according to Duterte's spokesperson, Salvador Panelo. (Duterte has said that the U.S. once denied him a visa when he planned to visit his college girlfriend.)

Reacting to Duterte's move, Trump last month said: "I don't really mind if they would like to do that. It will save a lot of money. My views are different from others."

Ministers from both countries would prefer to keep the troop agreement. U.S. Defense Secretary Mark Esper has said Manila's abrogation was "unfortunate" and called it "a move in the wrong direction," while Philippine Foreign Affairs Secretary Teodoro Locsin Jr. favors a "vigorous review" rather than a termination.

The 1998 Visiting Forces Agreement eases the entry of U.S. troops and their equipment into the Philippines for roughly 300 military drills annually, covering disaster response, counterterrorism and maritime security, among other operations.

"Without a VFA, it puts at risk things like these engagements, like these exercises," U.S. Department of State Assistant Secretary for Political-Military Affairs Clarke Cooper said during a teleconference in February.

The agreement is a vital aspect of the 1951 Mutual Defense Treaty, which obliges Washington to defend Manila in the event of an external attack.

"The VFA enhances our interoperability with the U.S. military," the senior Philippine military official said. "It's like preparation for the time when the Mutual Defense Treaty needs to be invoked."

For the investment-starved Philippine military, it also means additional equipment. From 2016 to 2019, which covers the first half of Duterte's six-year term, Washington's military funding for Manila amounted to $554 million, including $267 million in foreign military financing for the procurement of defense articles, Locsin said during a Senate hearing in February, when he spoke about the wide-ranging benefits to keeping the security alliance with the U.S.

Washington plans to spend more than $200 million in 2020 to 2021 for aircraft, training and equipment for the Philippines, and over $45 million in financing, according to Duterte's foreign minister.

But Duterte, who has doubled soldiers' salaries and approved purchases of fighter jets and frigates, says the time has come to cut reliance on the U.S. "My question to the armed forces: Can we survive without the Americans?" Duterte said in a televised speaking engagement in February. "Do we need America to survive as a nation? Do we need their arms?" 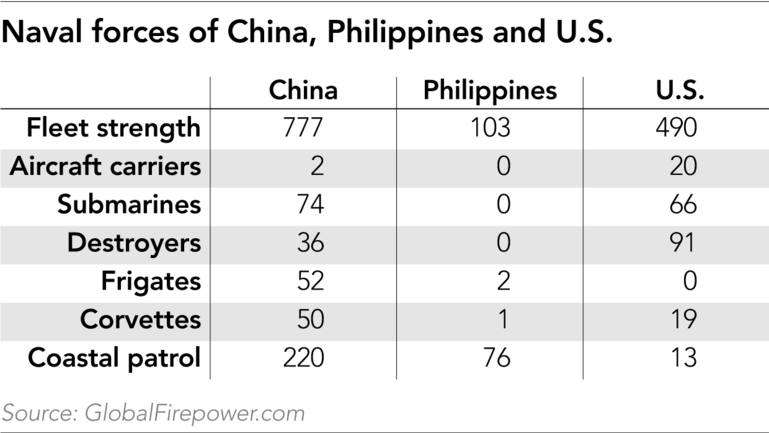 If not, the president said: "You might as well choose: We can be a territory of the Americans or we can be a province of China."

It was obviously a rhetorical question, but Duterte's critics believe the president has chosen the latter.

Since becoming president, Duterte has pivoted toward China and played down Beijing's expansion in the South China Sea in exchange for billions of dollars in investments. He has made multiple visits to Beijing and declared, "I just love President Xi Jinping." Meanwhile, he has called Americans "rude" and vowed not to visit the U.S.

His military, however, has not always been on board with the shift to Beijing. The defense establishment has subtly moved to scuttle Chinese investments they suspect as security risks, such as Chinese companies' bid to take over the bankrupt Hanjin shipyard in Subic Bay, a former U.S. naval base that opens to the South China Sea. When news emerged that Duterte had authorized the VFA termination, Philippine Defense Minister Delfin Lorenzana called it "fake news."

For many, Manila's abrogation of the VFA is reminiscent of American troops' eviction from the Philippines in 1991.

That year, the Philippine Senate, by a one-vote margin, rejected to renew the Military Bases Agreement -- a remnant of the Cold War -- kicking out U.S. forces the following year until they completed their exit in 1995, Jose Antonio Custodio, a military historian and defense analyst, told Nikkei.

"Then in that very same year [1995], the Chinese entered into Mischief Reef," Custodio said, referring to one of several reclaimed islands in the South China Sea. "They decided to take advantage of the vacuum that the Americans have left."

Stung by China's takeover of Mischief Reef in the Spratly Islands, the Philippines decided to modernize its military, which at that time was focused on fighting communist rebels and Islamic separatists in the southern part of the country. But alleged corruption and the Asian financial crisis in the late 1990s hampered the costly modernization.

"If not for China's takeover of the Mischief Reef, I doubt there would be a VFA," he said. 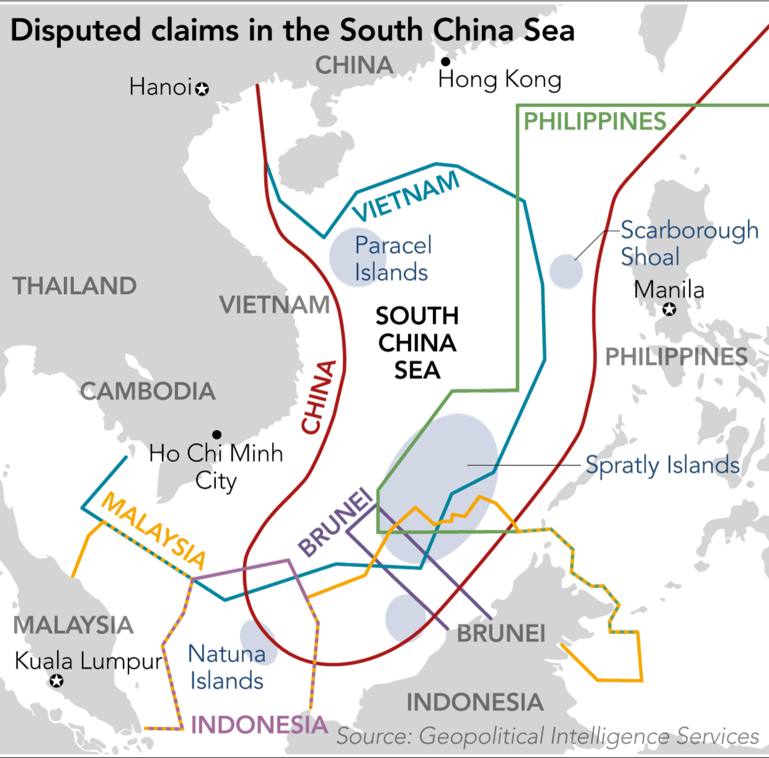 The security environment has since changed. China -- with a mightier economy and military -- has taken de facto control of the South China Sea by reclaiming seven artificial islands equipped with military outposts. In 2012, Beijing took over Scarborough Shoal after a monthslong standoff with Manila.

Duterte, who once broached the idea of forming an alliance with China and Russia, has echoed Beijing's position that non-regional countries like the U.S. are risking conflict in the South China Sea. Last year, one of the military drills near disputed waters involved retaking an airfield.

"The scale and nature of the military exercise probably alarmed President Duterte," according to De Castro, the security analyst.

Albert del Rosario, foreign minister under President Benigno Aquino, has raised alarm over the possibility that ending the VFA could be a prelude to the termination of the 2014 Enhanced Defense Cooperation Agreement, which allows U.S. military troop rotation and facilities construction in the Philippines, and ultimately the Mutual Defense Treaty.

"This will effectively upend the Philippine-U.S. alliance as we know it," del Rosario said in a forum last month, calling the move a "national tragedy." 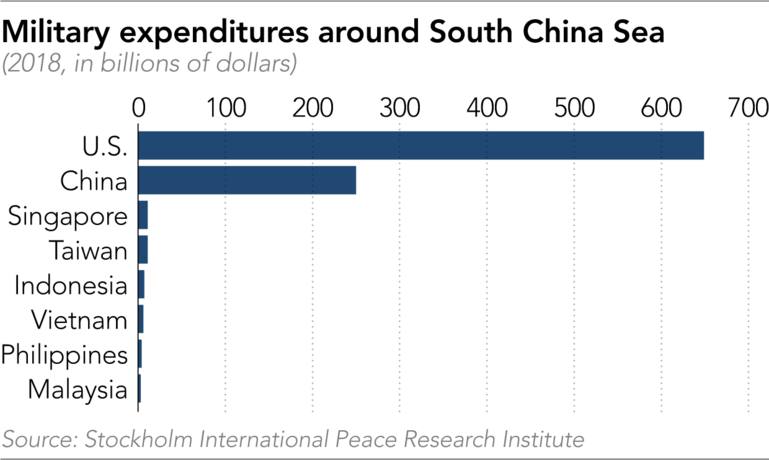 But analysts say terminating the Mutual Defense Treaty will complicate the Philippines' other security partnerships, such as those with Japan and Australia, which are major allies of the U.S.

Some military officials admit that the VFA is lopsided. The U.S. military enters the Philippines visa-free and its officers keep custody over soldiers who commit criminal acts, such as when a U.S. soldier was convicted of homicide by a Philippine court for killing a transgender Filipina in 2014. That incident sparked calls to scrap the VFA, similar to when a U.S. soldier was arrested in a rape case in 2005.

Yet, the U.S. and Philippine militaries have a robust relationship beyond the VFA, including intelligence sharing. In 2017, U.S. forces helped to kill the leader of the Maute group, Islamic State-aligned militants who for months laid siege in the southern city of Marawi.

Filipinos also see their former colonizers as the country's most trustworthy foreign partner. China, in contrast, is among the least trusted.

The Philippine Senate, anti-U.S. in 1991, has challenged Duterte's abrogation of the VFA by asking the Supreme Court to rule that the Senate should have a say in the troop agreement's fate.

Walter Lohman, director at the Asian Studies Center of the Davis Institute for National Security and Foreign Policy, believes Philippine-U.S. relations are strong enough to weather the storm.

"I think post-Duterte -- maybe even before he leaves, or before the notification period is up -- we'll find a way to continue," Lohman told Nikkei. "We've made it through tough times before."

The Philippine-U.S. meeting in mid-March in Manila, which was intended to plan for next year's activities, also highlighted the militaries' desire to continue drills. "We are trying to isolate the military from politics," the senior military officer told Nikkei. Troops from the Philippines and the U.S. take part in the annual Balikatan war-games exercise at a military camp in the northern Philippines in April 2015. © Reuters

Despite the notice of abrogation, Philippine and U.S. forces are going ahead with a major military exercise in May called Balikatan, which means "shoulder-to-shoulder."

"It's pushing through unless the coronavirus disrupts it," the senior military official said.

At least before Duterte deployed soldiers to enforce a monthlong virus lockdown on Luzon Island, home to 57 million people, this year's Balikatan was expected to involve more troops than last year's.

The U.S. military is clearly reluctant to let go. "It's a little disappointing that -- at this point we value our alliance with the Philippines, we continue to operate together with the Philippine Navy, and we'll see where this current narrative goes," U.S. Navy Admiral and Commander of the U.S. Pacific Fleet John Aquilino said in a recent teleconference.

Diplomats are also trying to save the VFA. Philippine Ambassador to the U.S. Jose Romualdez on Feb. 28 said he and his American counterpart in Manila, Sung Kim, were "trying to find ways and means" to "come up with something similar."

When asked if the alliance could survive this time, the senior military officer said: "Historically, it has survived."

https://asia.nikkei.com/Spotlight/Asia-Insight/Will-the-Philippine-US-military-alliance-survive-Duterte-and-Trump
Posted by Retired Analyst at 7:22 AM