China to Philippines: 'We won't take the first shot' 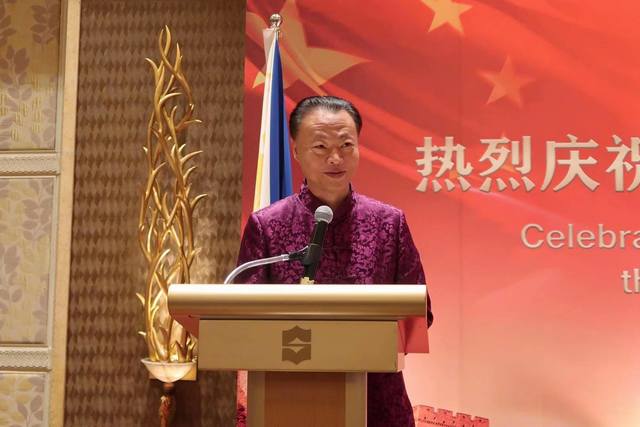 'PEACEFUL SETTLEMENT.' China says it is committed to a 'peaceful settlement' of disputes in the South China Sea. Photos from the Chinese Embassy in Manila

Amid criticism of its growing military presence in the South China Sea, China's ambassador to Manila Zhao Jianhua claimed Beijing would "not take the first shot," as he appealed to claimant countries to "be patient" when settling disputes.

In a speech celebrating the 92nd anniversary of the People’s Liberation Army on Monday night, July 29 in Makati City, Zhao stressed that China was developing its military "entirely" for self-defense.

"China adopts a military strategy of active defense which adheres to the principle of defense, self-defense, and post-strike response. Meaning, we will not take the first shot," Zhao said.

Zhao's words downplay President Rodrigo Duterte's repeated claim that China would wage war on the Philippine if it asserted its rights in the West Philippine Sea. He maintained that China is committed to settling disputes "peacefully" and would adhere to international law such as the United Nations Convention for the Law of the Sea (UNCLOS).

Lorenzana said that until China's actions match their words, "doubtful yung mga sinasabi nila (what they say is doubtful)."

Describing the South China Sea dispute as a "sensitive issue," Zhao urged other claimant countries to have "confidence in our wisdom that sooner or later we can settle it peacefully."

"China will continue to work with the Philippines and other states directly concerned to resolve the relevant disputes in the South China Sea through bilateral negotiation and consultation on the basis of respecting historical fact and in accordance with international law which also includes UNCLOS," he said.

But Filipinos have denounced China for claiming the West Philippine Sea despite a 2016 international ruling affirming the Philippines' rights over this part of the South China Sea.

China has also been criticized for its militarization of the South China Sea, harassment of Filipino fishermen in Philippine waters, and its deployment of maritime militia across the vast marine area. (READ: Philippines loses to China 3 years after Hague ruling)

In February 2019, reports showed China deployed its maritime militia to the vicinity of Pag-asa Island (Thitu Island) in the West Philippine Sea (South China Sea) since at least July 2018, after the Philippines began constructing on the island.

The Asia Maritime Transparency Initiative of the Washington-based Center for Strategic and International Studies said satellite images captured from mid-December to late January 2019 showed a high of 95 vessels on December 20, 2018, before dropping to 42 by January 26 this year.