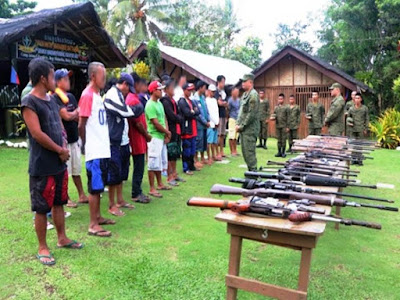 NSFA, Panacan, Davao City - The CPP-NPA Terrorist Group (CNTG) in Eastern Mindanao Command's (Eastmincom) area of responsibility continues to lose support and manpower with the continuing surrender of their regular members, members of Militia ng Bayan (MB), and the dissociation of their mass supporters.

Along with them are five members of the CNTG's Underground Mass Organization (UGMO) who dissociated themselves from the said organization.

In a separate instance, on the evening of June 16, 2019, two MB members and one SPL in Barangay Anitapan, Mabini, Compostela Valley surrendered to 71st Infantry Battalion under Ltc Estevyn Ducusin together with nine UGMO members who dissociated from the CNTG.

These surrenderees are now undergoing debriefing prior to their enrollment to the Enhanced Comprehensive Local Integration Program of (E-CLIP) the concern LGUs and Department of Interior and Local Government Field Offices.

Since January 1, 2019, to January 16, 2019, there are 300 NPA regular members, 271 Militia ng Bayan, and 37 members of the SPL who already surrendered to different units under Eastmincom. On top of it are 867 UGMO members who dissociated from the CNTG.

These surrenderees brought along with them 265 firearms of assorted caliber.

"Let us continue to make the CNTG irrelevant by supporting the different Local Government Units and National Government Agencies in their effort to sustain peace gains by pushing and bringing the government in the remaining conflict-affected and vulnerable areas in order to resolve the issues and address the concerns being exploited by the CNTG." Lt Gen. Santos said.