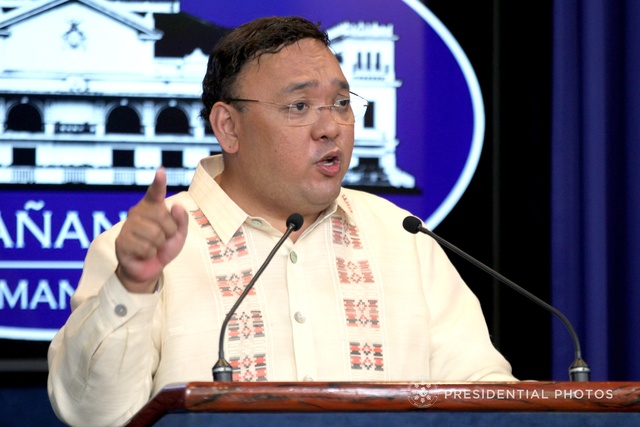 "What he meant was, that's exactly the kind of relationship we will have in a joint exploration and exploitation," said Roque during a press conference on Thursday, March 1.


Roque, asked if the term was used by Duterte to "simplify" the concept of joint exploration, said, "I believe so."

He gave assurances, however, that any agreement for joint exploration to be entered into by the Duterte administration does not mean the government is ceding sovereign rights over the West Philippine Sea to Beijing.

Joint exploration can be done without violating the Constitution, he said.

"The existing jurisprudence is 'yes,' we can enter into joint exploration and joint exploitation with foreign entities provided that it complies with the Constitution among others, it be pursuant to a written agreement signed by the President and submitted to Congress," added Roque.

He called joint exploration a "practical solution" that would allow Filipinos to "utilize natural resources without having to deal with the contentious conflicting claims to territories."

Roque, a former international law professor, said he doubted Duterte literally meant ownership as no state can "own" the West Philippine Sea.

Under international law, a state exercises sovereignty over its land territory and 12-nautical-mile territorial sea. Beyond it, and up to 200 nautical miles from its baselines, the state has "sovereign rights" – less than sovereignty, but exclusive and superior to the rights of all other states.

Hilbay took to social media to say Duterte may be violating the Constitution by entering into a joint exploration agreement with China.

"Here's a clear example of culpable violation of the Constitution and betrayal of public trust. The West Philippine Sea is exclusively ours. He's giving it away," said Hilbay.

Roque challenged Hilbay to file an impeachment complaint against Duterte.

"He's free to file an impeachment complaint if he wants. How can it be a betrayal of public trust when the Supreme Court itself has said it can be done?" said Duterte's spokesman.

However, the Supreme Court (SC) has yet to make a final decision on the petition assailing the constitutionality of the Joint Marine Seismic Undertaking (JMSU) in the West Philippine Sea entered into by the Arroyo administration, China, and Vietnam.

Magdalo Representative Gary Alejano has called on the Duterte administration to await the final verdict of the SC on the JMSU before entering into any agreement with China.

"I believe that the best course of action is to wait for the resolution of the JMSU petition and clear first the doubts as to the proper conduct in exploring and exploiting the resources within our seas," he said, as quoted by Interaksyon.

Alejano urged the SC to decide on the petition.

While Roque said the West Philippine Sea is a "disputed" water body, the Permanent Court of Arbitration in the Hague declared as invalid China's claims to the West Philippine Sea.
https://www.rappler.com/nation/197166-harry-roque-defends-duterte-west-philippine-sea-co-ownership-china
Posted by Retired Analyst at 7:56 PM