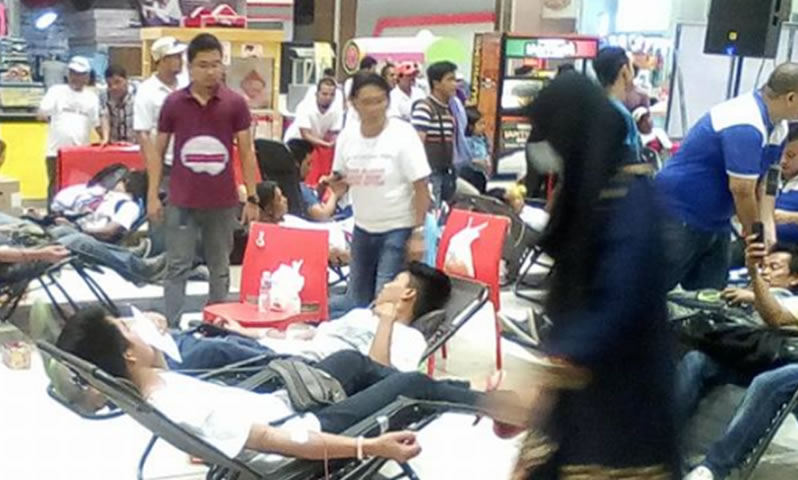 Once again, the Bangsamoro Development Agency-Central Mindanao (BDA-CenMin) conducted its 36th Muslim Blood Donation at the City Mall in Cotabato City on March 18, 2018.
As part of strong commitment of Hikmatul Ijtmaaey Institute (HII) based in Sitio Balas, Barangay Muti, Guindulungan, Maguindanao to support the MBD, 28 selected pupils from pre-school to higher grades showed their acquired talents to donors, shoppers, and onlookers at the City Mall Stage the whole day of the bloodletting proper.

The pupils were escorted by their teachers, and were led by the School Management Team who came all the way from Guindulungan to support the MBD.

Their teachers, while doing extra care for their pupils, also donated blood along with the entire HII management team.

In an interview, Engr. Rasul Piang, HII Chairman said, “It is the policy of HII to respond to any development intervention.”

“The HII responded appropriately to the request of BDA to support the MBD because, we believe that we become healthy when we donate blood, one becomes healthy at the same time, save the life of patients that need blood.” Piang explained.

As an academic institution to mold children, exposing them to an activity like this is one way to prepare them in becoming pious, and true public servants,” added Piang.

For his part, Prof. Saiden D. Antok, MPAIM, HII President, said in his message, “When we received the letter from the BDA requesting us to support the 36th MBD, I immediately called for a meeting of HII management to discuss and plan on how the school can support, and how it will be done.”

“Right after the meeting, I issued memorandum to Prof. Muslimin Abdul, HII Principal, enjoining him to call for a meeting of teachers to discuss, and plan for what they can do to support the 36th MBD,” Antok added.

“Our school is situated in the far-flung area of Maguindanao which takes hours for our pupils to go to Cotabato City,” said Prof. Muslimin Abdul, HII Principal, during a casual conversation with one of the active volunteers of MBD.

“But despite that, the teachers agreed that the best way to help the MBD is to select from among the most potential pupils of HII who will show various exhibitions during the activity,” Abdul said.

“As a sign of gratitude to the HII, and to the parents for allowing their children to travel far for this purpose, we also gave simple token to each of the 28 pupils,” said Nazneen Biruar-Piang, MBD Coordinator.

Finally, Shiekh Abdulrasheed Ambil, Regional Manager of BDA-Central Mindanao, expressed his wholehearted thanks and gratitude to the entire leadership of HII and to the parents of the pupils.