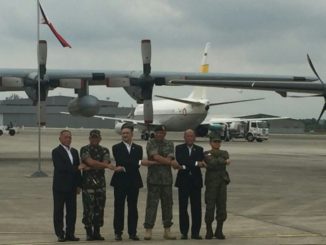 The Philippines, Malaysia and Indonesia on Thursday launched its “Trilateral Air Patrol” (TAP) to secure common areas of maritime interest against terrorists and other lawless elements.

“The TAP of Indonesia, Malaysia and the Philippines that complements the earlier arrangement for the conduct of the ‘Trilateral Maritime Patrol’ for the common area of maritime interest among these countries was launched today in Subang Air Base in Malaysia at around 2:30 p.m.,” he said.

The “Trilateral Maritime Patrol” was signed by the three nations last April. Defense ministers from the participating nations along with their ranking military officials attended the launching activity.

He added the TAP agreement has designated the area of maritime interest that will be the subject of both maritime and air patrols. It will be carried out from designated staging points.

Staging point for Indonesia is Tarakan; Bongao for the Philippines; and Tawau for Malaysia.

“Each country will take turns leading the mission thru a designated mission commander using host country air assets. Air patrol will be monitored from a maritime coordinating center. A host country will use their air assets with other nations patrol teams aboard,” the AFP spokesperson said.

To maximize resources from all sides, one country would conduct the task one at a time, he added.

Padilla said the launching of TAP is very timely as trade passing through the maritime areas of common concern of the three nations amounts to USD40 billion annually.