From Rappler (Jan 31: Soldiers report skirmishes with NPA in 7 areas

The military's report since Sunday: 2 soldiers killed, 3 wounded and one abducted 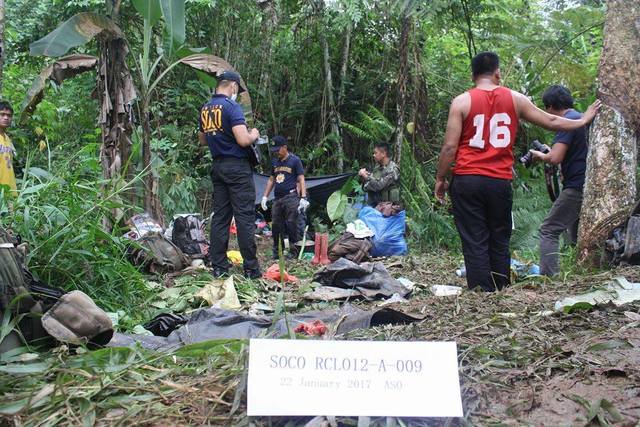 FIRST SHOT. A fatal encounter in Makilala, North Cotabato was the first to break the 5-month-old ceasefire between the military and the NPa. Photo from AFP's 10th Infantry Division

The Philippine military reported a series of encounters with the communist New People's Army (NPA) in at least 7 areas since Sunday, January 29, prompting questions about the status of the 5-month-old ceasefire between the 2 armed groups.

At least 2 soldiers were killed, one was abducted, and 3 were wounded in separate incidents in Luzon and Mindanao, the military said.

Eastern Mindanao Command chief Lieutenant General Rey Guerrero has ordered units to be on alert but reminded troops that ceasefire remains in place.

The military headquarters said it has reported these alleged ceasefire abuses to the Office of the Presidential Adviser on the Peace Process (OPAPP).

Government peace negotiator Hernani Braganza said they are coordinating with the National Democratic Front (NDF), the group representing the rebels in talks with government, to verify the incidents.

At least 7 incidents were detailed in press releases separately issued by Army units on the ground.
Peace talks

The 5-month-old ceasefire was first broken in Makilala, North Cotabato while talks were ongoing in Rome on January 25. (READ: Soldiers, NPA break ceasefire in Cotabato clash)

Braganza said they are verifing if NPA rebels were really involved in the incidents that happened only days after both camps celebrated significant accomplishments in Rome.

"The ceasefire continues to hold based on our agreement during the 3rd round of talks. We agreed to meet again in Utretch to discuss the possiblity of signing a bilateral ceasefire agreement," Braganza said.

"There are incidents on the ground but we don't know who are really involved. We are trying to verify," Braganza said.

The military and the NPA separately issued in August 2016 unilateral indefinite ceasefire declarations in support of the peace talks revived by President Rodrigo Duterte.

But situtation on the ground has grown untenable as both camps complained about each other's activities.

NDF chief negotiator Fidel Agcaoili had previously floated the "talk while fighting" scenario, where talks will continue even as fighting resumes on the groud. (READ: PH, NDF talks: Both sides need to make painful compromises)

The government peace panel, which wants to keep the ceasefire, has been pushing for a bilateral ceasefire deal that will impose common rules for the 2 armed groups. They failed to accomplish this in Rome.

But the NDF agreed to discuss the joint deal during a scheduled side meeting in February to be held in The Netherlands.