From Rappler (Jan 14): Gov't panel to meet Duterte before critical 3rd round of NDF talks

'We are doing this in the spirit of true reconciliation and genuine quest for just and lasting peace,' says government chief negotiator Silvestre Bello III 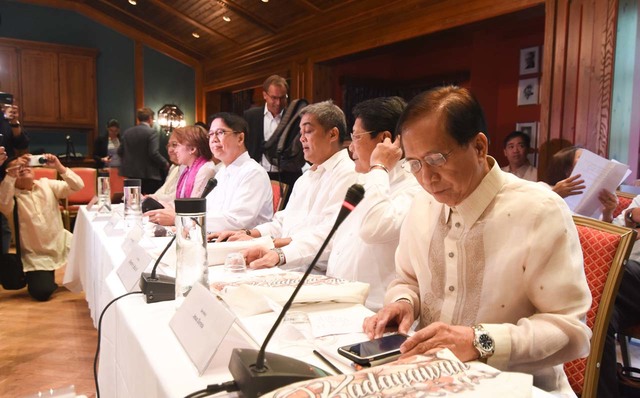 READY FOR TALKS. The government panel aims to sign the bilateral ceasefire deal during the 3rd round of talks in Rome. File photo by Edwin Espejo/OPAPP

The government panel talking peace with the communist National Democratic Front (NDF) will meet with President Rodrigo Duterte on Monday, January 16, before they fly to Rome for the 3rd round of talks set for January 19-25.


It is expected to be a critical round as communist rebels are warning of the possible collapse of the 5-month ceasefire between the military and the New People's Army (NPA).
The communists have complained about the delayed release of political prisoners and alleged ceasefire violations by the military. (READ: Gov't in backchannel talks to protect ceasefire)
"Chief government negotiator Silvestre Bello III on Monday will submit to President Rodrigo Duterte the draft documents that will be tabled for discussion during the 3rd round of peace talks with the NDF," said the Office of the Presidential Adviser on the Peace Process (OPAPP) in a statement on Saturday, January 14.
Documents to be submitted
The following draft agreements will be submitted:
"We are doing this in the spirit of true reconciliation and genuine quest for just and lasting peace," Bello said.


"We are all set and ready to engage the NDF in the discussion of all substantive agenda including supplemental agreements needed to proceed and arrive at a peaceful negotiated political settlement to end the armed conflict in the country," he added.
Joint ceasefire deal
Bello aims to sign in Rome the joint bilateral ceasefire deal that both camps originally scheduled to put in place by October 2016.
"We are challenging the NDF to formalize the unilateral ceasefire with a bilateral ceasefire agreement to give our communities and combatants a more secure environment for the peace process," Bello said.
The two panels are also set to sign a supplemental agreement on the already signed Comprehensive Agreement on Respect of Human Rights and International Humanitarian Law (CARHRIHL) to include the expanded role of the Joint Monitoring Committee (JMC).
The JMC is the body tasked to monitor the ceasefire.
http://www.rappler.com/nation/158354-government-panel-duterte-meeting-before-3rd-round-cpp-talks
Posted by Retired Analyst at 11:35 AM