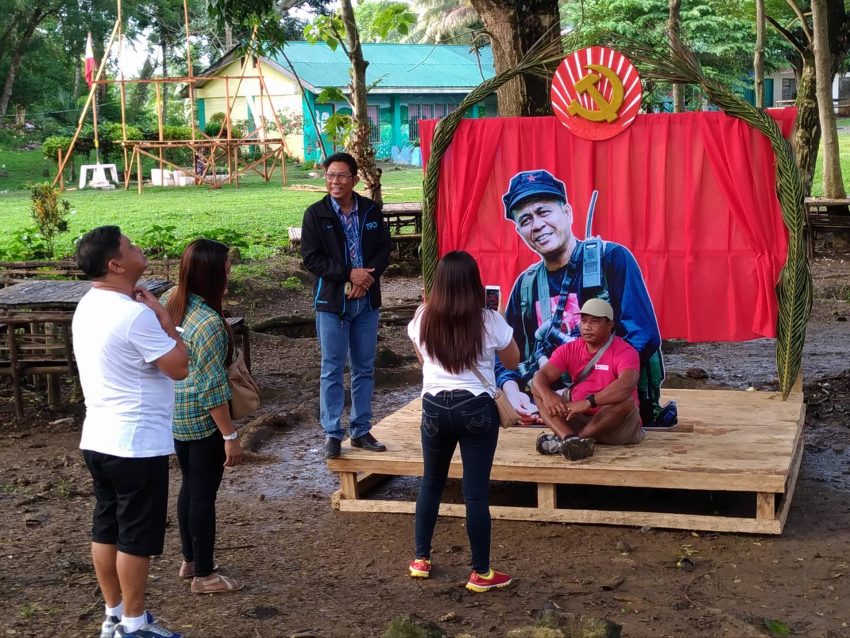 Visitors during the 48th anniversary celebration of the Communist Party of the Philippines take turns in getting their photos taken at a booth with a life size image of NPA commander Leoncio Pitao, aka Kumander Parago in Barangay Lumiad, Paquibato district on Monday, Dec. 26. (Zea Io Ming C. Capistrano)
The widow of a famous rebel leader urged the people to continue with the revolutionary struggle during the celebration of the 48th anniversary of the Communist Party of the Philippines here.
Despite her continued grief, Evangeline Pitao, wife of slain Ka Parago or Leoncio Pitao who was the commander of the New People’s Army 1st  Pulang Bagani Company, was among the thousands of attendees during the National Peace Assembly of the CPP in Barangay Lumiad, Paquibato district here on Monday.

Aside from Kumander Parago, Evangeline also lost her daughter, Rebelyn, who was raped and killed in March 2009.

Evangeline said the place of the CPP anniversary is all too familiar for her since it is where the former NPA commander spent his revolutionary life. Pitao said she was overwhelmed by the crowd present in the event.

“Nadasig jud ko sa kadaghan sa masa kay wala jud ko nag-expect ingani ka daghan mao maski dili malikayan na sakit sa akoa na namatay siya pero isip rebolusyonaryo akong bana masabtan man (I was moved by the number of people who attended here  because I didn’t expect thousands of people will  participate. That’s why even if it hurts for me that he was killed, I still understand because my husband was a revolutionary),” she said.

Evangeline said that the death of her husband should be an inspiration for  the people to continue with the revolutionary struggle.

“Nakita nato tanan ang effect sa diria tung naghead pa siya sa command, daghan kayo ang tao na nagsupport mao dapat madasig jud ta (I witnessed how he made an impact on the lives of the people when he led the command here. There so many people who are supportive, that is why we should be inspired),” she said.

She said  that despite the death of her husband, people can see how the revolutionary party strengthened their forces despite the massive military operations.

Evangeline shared her enthusiasm as she saw the photo booth with the picture standee of her husband.

Meanwhile, she shared that she may have accepted the death of her husband,  but she cannot accept the death of her daughter who was allegedly killed by the Military Intelligence Group under the 10th Infantry Division of the AFP.

“Ang dili jud nako madawat kay ang pagkamatay sa akong anak na si Rebelyn kay dili man tawon siya New People’s Army, teacher man tawon to siya (What I can’t accept is the brutal death of my daughter Rebelyn because she was not an NPA, she was a teacher),” she said.

Forensic findings showed that Rebelyn was raped and heavily tortured.

Read: A year after: No justice in sight for Rebelyn Pitao

Evangeline said that she still worries for the safety of her family even after the death of her husband, adding that they are still vigilant since they might still be under surveillance by the Army’s intelligence.