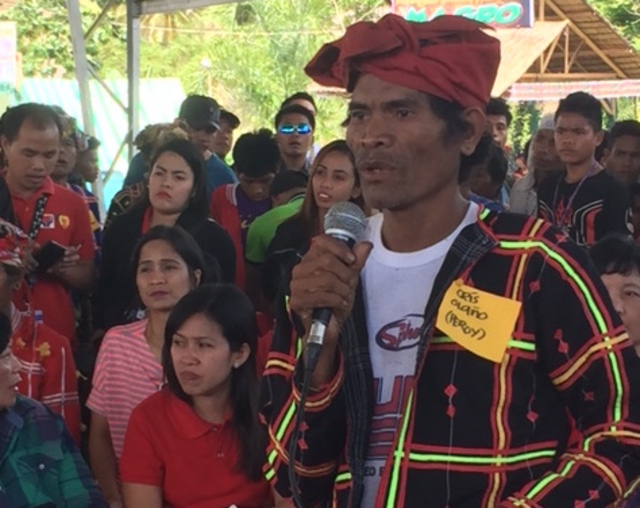 UNDER THREAT. Datu Cris Olaño, a Lumad leader, expresses his concerns during a congressional inquiry on January 29, 2016. Photo by Editha Z. Caduaya/Rappler

Indigenous peoples from a village in Talaingod, Davao del Norte again expressed concerns about the alleged harassment by military and paramilitary forces in their area.

A week ago, around 170 Lumad from Talaingod fled to the Haran compound of the United Church of Christ in the Philippines (UCCP) in Davao City.

One of their leaders, Datu Mard Buntu-ag, told a congressional inquiry on Friday, January 29, that they continue to fear for their safety.

(READ: Is the military innocent in Lumad killings?)

"We used to eat 3 times daily, but when the soldiers entered our communities, our lives were endangered. They accused us of being rebels," Buntu-ag said.

"We went home December 30, thinking we will be safe [in Talaingod] and live a normal life, but here again we are threatened," he said.

The military's Eastern Mindanao Command (Eastmincom), however, maintained that they are not backing the Alamara.

"We do not encourage paramilitary groups. We have yet to get evidence that the Alamara is helping the soldiers in our counter-insurgency efforts," said Eastmincom commander Major General Rey Leonardo Guerrero. "We will run after Alamara and other lawless elements in upland communities, especially now that elections are approaching."

Guerrero added that the military regularly conducts foot patrols because it receives reports that New People's Army (NPA) rebels are disturbing the residents.

(READ: Lumad: Caught in the middle of a war)

"Leave us alone," Sayad said. "We are capable of protecting our communities because we have our own political structure, we have our way of keeping peace. Rebels must be driven out from our lands."

Romy Maas, another Lumad leader from Talaingod, appealed to authorities to spare them from the government’s fight against communist rebels.

"We're not NPAs, we’re just farmers and civilians. The Alamara should not target us," Maas said.

In May 2015, more than 700 Lumad were displaced from Talaingod after alleged government forces and the Alamara occupied several villages in the town. Human rights groups reported cases of harassment and indiscriminate firing.

(READ: TIMELINE: Attacks on the Lumad of Mindanao)

"They described to me their concerns including their alleged forced recruitment into paramilitary groups, known as Alamara, under the auspices of the AFP and harassment in the context of the ongoing conflict between the AFP and the NPA," Beyani said.

Catamco came under fire last July for allegedly insulting the Lumad, but she denied the allegation, pointing out that she herself was an indigenous person. She also insisted that the Lumad were being suppressed at the Haran compound.

On Friday, Catamco vowed to address the plight of the Lumad.

"We really wanted to solve their concerns and these have been recurring, the health department, the social services and the education directors are all here because we are seriously looking into this situation and we are ready to provide them the urgent and the long-term needs of the community," she said.

http://www.rappler.com/nation/120882-lumad-talaingod-davao-del-norte-evacuation
Posted by Retired Analyst at 8:41 AM