Analysts: US should strengthen ties with Philippines to sustain Asia rebalance

From the Philippine Star (Feb 1): Analysts: US should strengthen ties with Philippines to sustain Asia rebalance 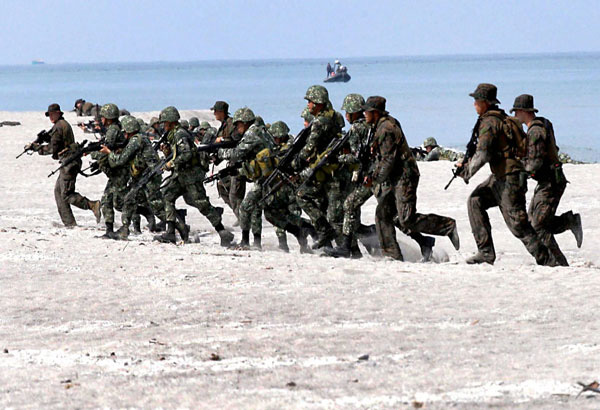 The Enhanced Defense Cooperation Agreement between the Philippines and the United States strengthens the latter’s rebalance to Asia strategy. File photo

The United States (US) should extend its efforts to strengthen its alliance with the Philippines to sustain its rebalance in Asia, analysts said.

Analysts Kathleen Hicks and Michael Green said that the US has plenty of opportunities to network with its allies and partners in Asia such as Japan, Australia and India.

"This federated approach to defense should extend to the Philippines and other frontline states that are eager to improve in the face of expanding Chinese naval and air presence in the First Island Chain," Hicks and Green said in an article published on the blog of the Center for Strategic International Studies.

The analysts, however, added that the US should also expand its military ties with China to strengthen its confidence in areas such as humanitarian and disaster relief and crisis resolution.

"The US military must continue to expand and improve its Pacific posture—military forces, footprint, and agreements—to promote stability and deter aggression," the analysts said.

Hicks and Green added that the US expansion should include its access agreements with Australia, consolidation of Marine bases in Okinawa, Japan and opening of new facilities in Guam.

"Moreover, we must continue placing a premium on US military presence in Asia even as budgets contract and global force demand remains high," Hicks and Green said.

The analysts also suggested that the US should focus on building long-term defense capability investments for Asia by reducing known threats to American forces and strengthening its defense against potential military competitors.

The next US administration should have an Asia-Pacific strategy that sets out its goals in Asia, the analysts said.

"The rebalance to Asia should be a cornerstone of the next administration’s foreign policy, regardless of which party captures the White House," Hicks and Green said.
The analysts stressed that these steps would strengthen the rebalance of the US in Asia and ensure its longevity.