The Philippine Air Force has 3 operational C-130 planes in its inventory, one of which is currently under maintenance 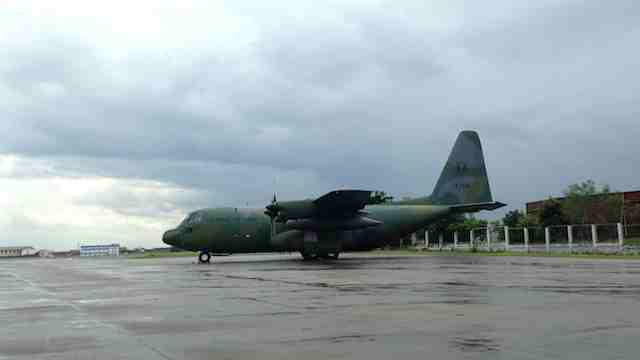 CRITICAL ASSET: File photo of a C-130 cargo plane of the Philippine Air Force
The Armed Forces of the Philippines (AFP) completed on Thursday, January 8, inspection of two C-130 cargo planes it is buying from the for about P2.6 billion, making way for deliveries early next year.
"Following the inspection, Major General [Victor] Bayani has signed the Letter of Offer and Acceptance on behalf of the government of the to procure the aircraft, with an anticipated delivery date in the first quarter of 2016," the embassy said in a statement on Friday, January 9.
The cargo plane, which can carry about 100 troops or its equivalent in weight, is "one of the important" procurement projects of the Philippine Air Force (PAF), said spokesperson Colonel Enrico Canaya.
The entire AFP, the Philippine National Police, and government agencies, especially the Department of Social Welfare and Development (DSWD), rely on the PAF in moving troops and logistics to different parts of the archipelago.
One brand new C-130 cargo plane reportedly costs about P2.2 billion.
Only 3 operational C-130s
The acquisitions from the military will increase the PAF's inventory of C-130s to a total of 5. The PAF at present has only 3 operational C-130 planes, one of which is currently under maintenance.
The Air Force is also waiting for the delivery of 3 medium-lift and two light-lift aircraft, the counterparts of the Fokker and Nomad planes, respectively.
Limitation in these types of aircraft proved to be a challenge in the aftermath of Typhoon Yolanda (Haiyan) in November 2013, said Canaya. Foreign militaries, including the , later on brought in various types of cargo planes to assist in bringing in relief goods and moving typhoon victims out of Leyte and provinces.
The US State Department approved the request of the to purchase the cargo planes in August 2014.
"The sale of the two C-130s is part of the US government's commitment to help the Philippines develop its territorial defense and maritime security capabilities, as well as enhance its ability to respond to humanitarian assistance and disaster relief emergencies, which routinely occur in the Philippines," the US embassy said.
http://www.rappler.com/nation/80269-us-c130-cargo-planes-purchase
Posted by Retired Analyst at 2:54 AM