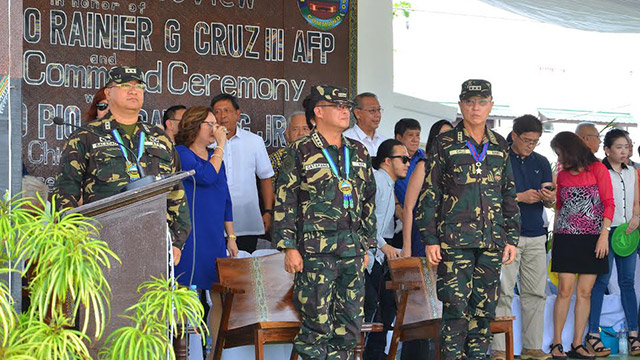 - Major General Aurelio Baladad on Friday, September 5, assumed the top post of one of the country's largest military commands, the Eastern Mindanao Command (Eastmincom) based in this city.


Baladad, the 8th commander Eastmincom, replaced Lt. Gen. Ricardo Rainier Cruz III who will retire from the military on September 6. Eastmincom is relatively a new command in the Philippine military, which used to just have one command – the Western Command based in – overseeing all Armed Forces troops and facilities in . Eastmincom covers communist hot spots such as the region, Caraga, Misamis Oriental, Bukidnon, as well as Sarangani, South Cotabato, North Cotabato, and . The area is host to about 2,000 New People's Army (NPA) members or about half of the estimated strength of the armed wing of the Communist People's Party (CPP), based on military estimates.


Baladad accepted the challenge. "To the people of , I am reporting for duty. Rest assured that the team EastMinCom will work for the achievement of lasting peace and development," Baladad said.


The bemedalled Baladad is a graduate of the Philippine Military Academy and is a member of the “Sandigan” Class of 1982.


It was during his Tanay stint when he was linked to alleged human rights abuses. As brigade commander he led the arrest of the so-called "Morong 43" – a group of people tagged by the military as NPA members but who, according to human rights groups, turned out to be health workers. Baladad and other soldiers involved in the arrest were accused of human rights violations before the Commission on Human Rights.


In 2012, he was designated as the assistant division commander of the Army’s 9th Infantry Division in the Bicol region.


Meanwhile, the retiring Cruz was recognized for "effectively implementing" Internal Peace and Security Plan “BAYANIHAN” through the command's own campaign plan dubbed as “PANAGDAIT MINDANAW II.”


The military claimed that under the command of Cruz at least 247 members of the NPA surrendered while more than 273 assorted firearms were recovered.