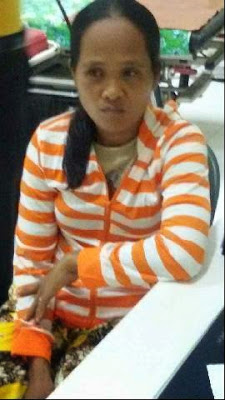 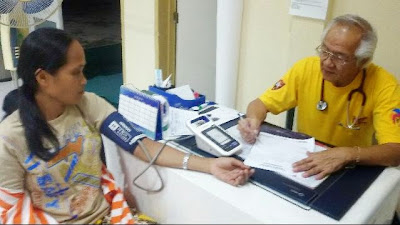 Photos released by the 1st Infantry Division to the Mindanao Examiner Regional Newspaper show a captured NPA leader Mercy Maghinay being examined by a doctor as part of a routine procedure.

Barrientos, quoting an army intelligence report, said Maghinay, a native of Zamboanga del Sur province, had been arrested in 2008 in General Santos City and eventually freed on bail only to rejoin the NPA in Zamboanga del Norte province.

Citing reports from Col. Apolinario Alobba, commander of the 101st Infantry Brigade in Zamboanga del Norte, Barrientos said troops and government militiamen also recovered a shot gun, a .45-caliber pistol, a hand grenade and some P100,000 in cash from Maghinay.

Alobba said members of the Special Forces and 10th Infantry Battalion were patrolling the hinterland village of Guibo when it encountered Maghinay’s group near a rebel encampment and firefight ensued. He said there were no reports of military casualties and it was unknown if there were rebels killed or wounded in the fighting.

He said Maghinay’s group was also behind last year attack on a construction firm in the village of Titik in Zamboanga del Norte’s Sindangan town where rebels torched some P50 million in equipment.

Barrientos, quoting an army intelligence report, said Maghinay, a native of Zamboanga del Sur province, had been arrested in 2008 in General Santos City and eventually freed on bail only to rejoin the NPA in Zamboanga del Norte province.

“The capture of Maghinay is a big blow to the leadership of the NPA in Western Mindanao,” he said.

Barrientos also urged rebels to surrender peacefully and avail of the government’s amnesty program and various livelihood aids and reunite with their families. “The NPAs is on the run and they are tired and hungry and we urge them to return to the folds of the law and reunite with their families, join the mainstream society and live peacefully with the community,” he said.

“We shall ensure the safety and well-being of the NPAs who will lay down their arms.  This is an opportunity to live peacefully and return to the comfort of their families. We are Filipinos and we all aspire for a peaceful country,” he added.

The NPA, armed wing of the Communist Party of the Philippines, has been waging a secessionist war for decades now and previous peace talks had collapsed after Manila rejected several demands by rebel leaders and among them is for the government to free all political prisoners languishing in jails across the country.

http://www.mindanaoexaminer.net/2014/07/army-captures-top-female-npa-leader-in.html
Posted by Retired Analyst at 4:37 AM