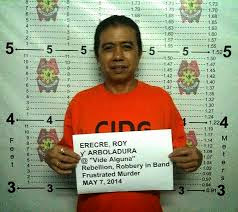 The National Democratic Front of the Philippines has condemned the arrest by police and military authorities of a senior communist rebel leader in Davao City.

It said the arrest of Roy Erecre, who was nabbed with his girlfriend Judith Niog on May 7, was illegal and demanded his immediate release from jail. The NDFP, political wing of the Communist Party of the Philippines, said Erecre, being its consultant to the peace talks with Manila, is immune from arrest.

It said Erecre, who holds an NDFP Document of Identification No. ND978243 under the assumed name of Vide Alguna since 2001, is covered by the Joint Agreement on Safety and Immunity Guarantees (JASIG) signed by government chief peace negotiator Silvestre Bello. JASIG serves as safe conduct pass for all consultants and members of the communist group.

“We condemn the Armed Forces of the Philippines and PNP units for disregarding Roy Erecre’s NDFP Document of Identification, which he had in his possession upon the illegal arrest. We demand his immediate and unconditional release. For the meantime, his rights to be visited by his relatives and lawyers must be respected.”

“We hold the Aquino regime accountable for this latest gross violation of the Joint Agreement on Safety and Immunity Guarantees. In addition to the illegal arrest and detention of NDFP Consultants Benito Tiamzon and Wilma Austria, and the continued violation of the rights of more than a dozen other NDFP consultants and JASIG-protected personnel, this continued refusal of the Aquino regime to comply with its obligations according to the JASIG and the Comprehensive Agreement of Respect for Human Rights and International Humanitarian Law is a big obstacle to the holding of peace negotiations between the regime and the NDFP,” it said in a statement.

Benito Tiamzon is the current chairman of the Communist Party of the Philippines, while his wife Wilma is its Secretary-General. Both were arrested in Cebu province in March.

The military said the communist group has been invoking the JASIG on every arrested high ranking members of the rebel group New People’s Army although majority or all the names in the list were aliases and there is no way to determine their real identities.

Erecre, who is allegedly a politburo member of the Communist Party of the Philippines and regional leader of the New People’s Army in Central Visayas region, is being held in Bohol province where he is facing a string of criminal charges.

Captain Alberto Caber, a spokesman for the Eastern Mindanao Command, said Niog was released from military and police custody. He said both were arrested in the village of Sasa where undercover agents tailed them undetected for one week while vacationing in different beach resorts and hotels in Davao.

He said authorities seized communist propaganda and P352,000 in cash from Erecre. He said the money may have come from extortion activities of the NPA in central Philippines and was supposed to go to the coffers of the rebel group, but had been absconded by Erecre.

“We still don’t know where he got the money, but it can end up in the coffers of the NPA or wired directly to Jose Maria Sison or finance terror attacks and it is clear that he absconded the money,” Caber said referring to the founder of the Communist Party of the Philippines now in exile in the Netherlands.

Caber said Erecre had a P5.4 million bounty for his capture.

Government peace talks with the NPA collapsed in 2004 after rebels accused then President Gloria Arroyo of reneging on several agreements, among them the release of all political prisoners in the country and the removal of the terrorist tag on the Communist Party of the Philippines and its political wing, the National Democratic Front of the Philippines, and the NPA.

Manila also suspended the JASIG after the peace talks failed. The rebels have been fighting for decades now for the establishment of a Maoist state in the country.

Posted by Retired Analyst at 3:58 AM