From the Wall Street Journal (May 14): China Begins Construction in Spratly Islands 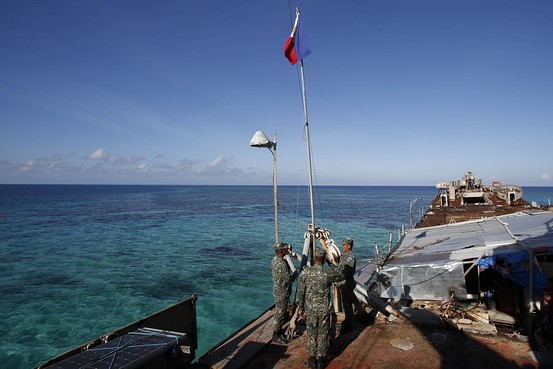 Philippine Marines, part of a military detachment stationed aboard the BRP Sierra Madre, take part in a flag raising ceremony in March at the disputed Second Thomas Shoal, part of the Spratly Islands in the South China Sea. Reuters

has begun a construction project in the disputed , drawing a formal protest from the , which said the move violates a longstanding pledge not to build on any of the 's contested islands.


The project is the latest example of Beijing's increasingly assertive behavior in the South China Sea, a week after it boldly deployed a large oil rig, guarded by a flotilla of ships, to disputed waters east of .


That action sparked anti-Chinese protests and violence against factories in Vietnam, and prompted U.S. Secretary of State John Kerry to criticize 's "aggressive" and "provocative" moves.


The Philippine Department of Foreign Affairs said in a statement that Wednesday that it had lodged a formal protest with on April 4 regarding the construction work at Johnson South Reef in the Spratlys. had rejected the protest, it added. The DFA didn't respond to questions about how it knew about the construction work, or what it suspected of attempting to build there.


Chinese Foreign Ministry spokeswoman Hua Chunying confirmed Wednesday that China is indeed building on Johnson South Reef, saying that the "reef is Chinese territory" and such activity was normal.


"Construction by the Chinese side on an island in Chinese territory is entirely a matter that comes under Chinese sovereignty," she said.


She declined to say what was building there.

In 2002 and Asean issued a non-binding declaration in which they undertook to avoid making any provocative moves in disputed territory, including construction on disputed features. Long-running attempts to establish a binding code of conduct have borne little fruit.


has occupied Johnson South Reef since capturing it from in 1988 in a clash that killed around 90 Vietnamese sailors. The also claims the reef.


Philippine reports of Chinese construction at the reef are therefore also expected to spark an angry reaction in , which is already furious about the appearance of a Chinese drilling platform in what it regards as Vietnamese territorial waters.


At an Asean summit meeting in on Sunday, Vietnamese Prime Minister Nguyen Tan Dung branded 's deployment of the rig as an "extremely dangerous action."


Ms. Hua said Mr. Dung was wrong to use the Asean summit to air his grievances. 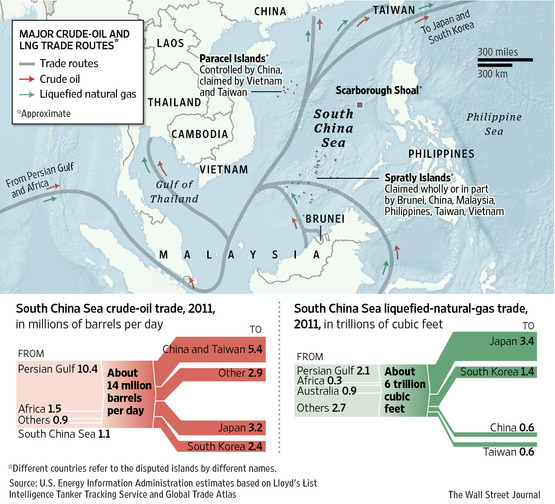 Last year, Philippine Defense Secretary Voltaire Gazmin accused China of placing concrete blocks at Scarborough Shoal—another disputed area of the South China Sea—with a view to constructing permanent facilities there. However, he later retracted the remarks when it became apparent that the barnacle-covered blocks must have been positioned there some years earlier.

Sino-Philippine relations have been severely strained ever since a maritime standoff at Scarborough Shoal in 2012. The confrontation ended with Chinese ships taking control of the area of reefs, which lies some 130 miles west of the Philippine island of Luzon—well within what Manila claims as its 200 nautical mile exclusive economic zone.

The Philippines subsequently referred the issue of China's claim to most of the South China Sea to the United Nation's International Tribunal of the Law of the Sea at The Hague, arguing that the so called "nine-dash line," which China uses to mark out its claim, has no legal basis. The arbitration process—in which has refused to participate—is still ongoing.

is deliberately increasing its presence in the South China Sea in order to ramp up pressure on rival claimants, especially the and , said Renato Cruz De Castro, a professor of international studies at De La Salle University in .

"The has been waiting for the right opportunity to persuade to join it in the arbitration case," Mr. De Castro said. "This could be it."