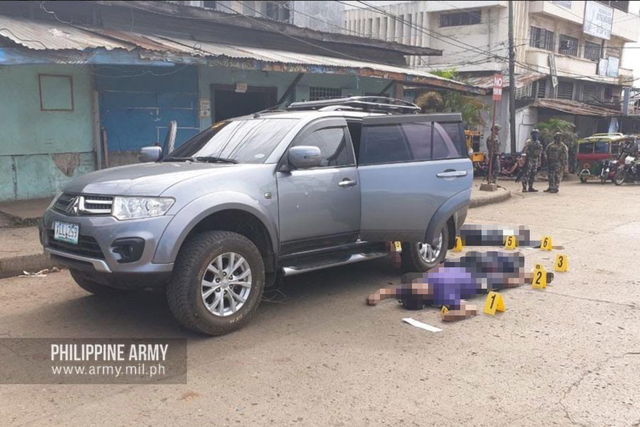 SLAIN SOLDIERS. Four soldiers were gunned down by police in Jolo, Sulu, on June 29, 2020. Photo from the Philippine Army

The military on Tuesday, June 30, accused Sulu policemen of killing 4 intelligence soldiers without a gunfight or provocation in Jolo on Monday, June 29.

Armed Forces of the Philippines (AFP) spokesperson Major General Edgard Arevalo said in a CNN Philippines interview on Tuesday that photos and information they have gathered showed that the police shot at the soldiers while they were inside their vehicle, except for their commander who had walked to the cops unarmed to explain their presence in the area.

Army chief Lieutenant General Gilbert Gapay is “enraged” by the incident and wants a full-blown investigation, the Army said in a statement on Tuesday.

"The soldiers were on a mission to identify the location of known terrorists in the area. Based on eyewitness accounts, no altercation transpired between the two parties nor was there any provocation on the part of Army personnel to warrant such carnage. Furthermore, no agents from the Philippine Drug Enforcement Agency are involved and this is not an anti-drug operation. The Army grieves and condoles with the families of our fallen men. There will be no let up in our quest for truth and justice," Gapay said.

According to a miltary report, the 4 were conducting a signals intelligence or SIGINT operation in the Sulu capital on Monday to track down alleged suicide bombers affiliated with the ISIS-linked Abu Sayyaf bomb expert Mundi Sawadjaan.

As they were driving an SUV through Barangay Bus-Bus, Jolo, at around 2:30 pm, they came upon a checkpoint where police flagged them down.

The intelligence men – all in civilian clothes – introduced themselves as members of the military, but the cops doubted the claim and asked them to report to the nearby police station. The soldiers agreed.

Major General Corleto Vinluan Jr, commander of the Army’s 11th Infantry Division that has supervision over the 9th ISU, told Rappler that the soldiers were in plainclothes because they were doing intelligence work.

What the police should have done in a situation like that, said Vinluan, is to call the soldiers' battalion or mother unit and verify their identities.

Instead, the cops ordered them to drive to the nearest police station.

The Army soldiers followed in their SUV but went past the station by about 50 meters, deciding instead to park their SUV in front of a fire station.

“Apparently for security reasons, they moved a little further away from the police station pero huminto rin sila (but they stopped eventually),” Arevalo said.

In fact, the unit commander, Major Indammog, got off the SUV and left his gun in the vehicle to speak to the police, who apparently had also gotten off their vehicle to talk to the soldiers, the military said.

The military said Indammog's men were left in the SUV.

A police report said that at this point, the soldiers "lifted and pointed their firearms" at the cops, prompting the cops to open fire.

Photos showed the victims’ bodies splayed near or inside their vehicle, he added.

The military and police top brass earlier agreed to let the National Bureau of Investigation probe the incident, to ensure “impartiality” and avoid stoking tensions between the two uniformed services.

Interior Secretary Eduardo Año, a former military chief who now supervises the Philippine National Police (PNP), on Monday night ordered the detention and disarming of the cops involved in the incident.

Arevalo said the PNP leadership has expressed its condolences over the killing of the 4 military intelligence officers.