Naval Task Force 82 set out to evacuate Filipinos from impending war in the Middle East but ended up facing a pandemic, a super cyclone, and engine fire. Now, they're finally home. 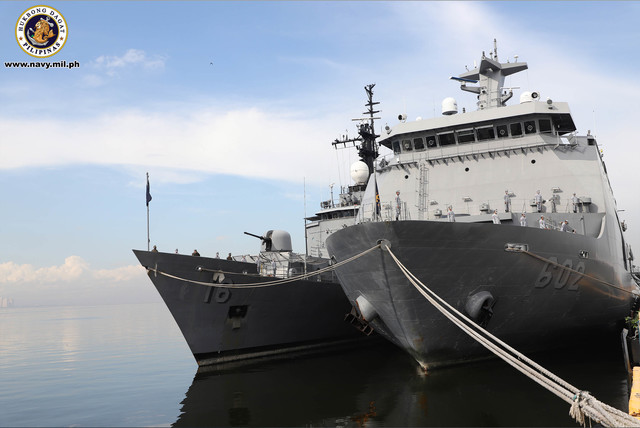 SAFELY HOME. The Navy's BRP Davao del Sur and BRP Ramon Alcaraz are back in the Philippines after a 5-month deployment to the Middle East, India, and Sri Lanka. Photo from the Philippine Navy

Originally meant to save Filipinos from impending war in the Middle East, the sailors, marines, and reservists of Naval Task Force 82 instead dealt with a pandemic, a super cyclone, and fire in the engine room.

Five months since their mission began, the task force aboard the landing dock ship BRP Davao del Sur and the patrol ship BRP Ramon Alcaraz finally pulled into Manila Bay on Independence Day, June 12. On Tuesday, June 16, they were given the official welcome home at the Manila South Harbor by the military top brass and Defense Secretary Delfin Lorenzana.

The sailors brought home 31 Filipinos who were stranded in India and Sri Lanka, and some 200,000 face masks from India donated by businessman Paul Dantes.

The task force headed by Colonel Noel Beleran left the Philippines in January and sailed for Oman. The January 3 US drone attack on the airport in Baghdad that killed Iranian military general Qasem Soleimani had threatened to plunge the Middle East into war, and the Philippine government sent the two ships to help repatriate Filipinos in the region.

Tensions in the Middle East cooled and evacuating Filipinos became unnecessary – until the coronavirus pandemic crept in. The naval task force remained in Oman for weeks awaiting orders.

The Davao del Sur and the Ramon Alcaraz then set sail for India, arriving in the Port of Cochin on May 6. They collected the 200,000 face masks in 59 cargo boxes, and 19 Filipino tourists who got stranded when international travel was restricted because of the pandemic.

Both ships pulled out of Cochin the following day, May 7, to head home to Manila. A few hours into the voyage, fire broke out briefly in the main engine room of the Ramon Alcaraz, forcing it to head back to Cochin. Two sailors suffered burns, and had to be hospitalized. 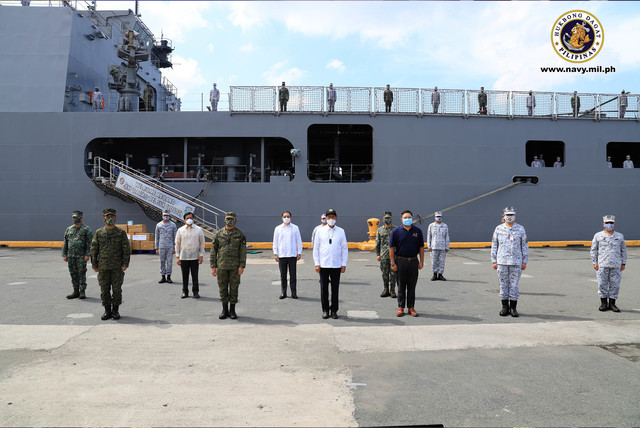 Although it was not ideal to sail without an escort, the Davao del Sur, which carried the repatriates and the cargo, continued the voyage to Manila while the Ramon Alcaraz stayed in India for repairs.

But while the Davao del Sur was sailing through the Bay of Bengal in mid-May, Super Cyclone Amphan began to form and shaped up to become one of the most devastating storms the region has seen in years. The Davao del Sur, too, had to turn back to Cochin.

Back in tandem, the two ships finally left Cochin under clear skies on May 27. They stopped by the Port of Colombo in Sri Lanka on May 29 to pick up 12 more stranded Filipino tourists and workers.

The 31 repatriates were accommodated in separate cabins on the Davao del Sur, where they were monitored for COVID-19 by the Navy’s medical crew. They had completed the 14-day mandatory quarantine by the time they reached Manila Bay, and none of them showed symptoms of the disease, the Navy said.

Upon docking in Manila, the sailors, marines, and reservists of the task force were swab-tested for the coronavirus. The Navy said it would coordinate with local governments to send the 31 repatriates home.

The voyage was “an all-time first for the Philippine Navy,” Beleran said. The Davao del Sur and the Ramon Alcaraz are among the Philippine Fleet’s newer vessels – products of the military’s modernization program – and the mission could not have been done without them.

https://www.rappler.com/nation/264000-philippine-navy-completes-middle-east-india-sri-lanka-mission
Posted by Retired Analyst at 9:06 AM