PHL, US enhance counterterrorism ties despite probable termination of VFA

From the Business Mirror (May 13, 2020): PHL, US enhance counterterrorism ties despite probable termination of VFA (ByRene Acosta) 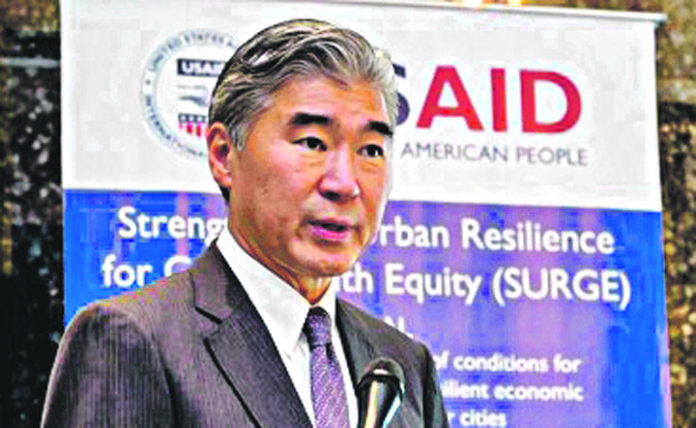 THE United States and the Philippines continue to enhance their counterterrorism partnership in other aspects despite an earlier initiative by the Duterte administration to scrap the Visiting Forces Agreement (VFA).

Early this week, both countries worked to enhance collaboration and coordination on terrorist investigation and prosecution through a virtual workshop hosted by the US Department of Justice’s Office of Overseas Prosecutorial Development, Assistance, and Training (DOJ-OPDAT) in the Philippines.

“No country can fight the battle against terrorism alone because terrorists recognize no borders, and they honor no laws,” US Ambassador Sung Kim said in opening the workshop.

“Terrorists view a global crisis as an opportunity. So public officials must be vigilant against this threat, even in the midst of a public health crisis. We are thrilled to be able to build on our strong counterterrorism cooperation. I am confident that the initiatives like this workshop will continue to strengthen our shared fight against terrorism,” he added.

In February this year, the Philippines notified the US of its scrapping of the VFA, a security agreement that has continuously trained Filipino soldiers on counterterrorism and had provided them with technical assistance in dealing with terrorist groups such as the Abu Sayyaf Group and other local organizations allied with the Islamic State.

During the workshop, Deputy Assistant Attorney General Bruce Swartz of the US Department of Justice’s Criminal Division, who also delivered the opening remarks, said that the use of “battlefield evidence” is critical in criminal prosecutions and cooperation among governments.

“Police and prosecutors need to work collectively around the world. This is a worldwide partnership to identify terrorists that threaten citizens of all nations. I look forward to the work we continue to do together in fighting terrorism,” Swartz said.

Among the topics at the workshop were police-prosecutor cooperation, proper handling of explosives and other battlefield evidence, training police and military on chain of custody issues, and the use of digital evidence.

The workshop featured a panel discussion on counterterrorism investigations with an Assistant US Attorney for the Eastern District of North Carolina, representatives from the Federal Bureau of Investigation and Philippine experts.

“Clearly, Covid or no Covid, terrorists have no agenda for peace. Their aim is destruction of lives and properties. It is but fitting that we face these enemies with the full force of our laws. It is imperative for us to collaborate with our citizens, law enforcement agencies and other important partners in combatting these terrorist groups and their activities,” he said.