From Rappler (May 9, 2020): PH Navy ship that caught fire returns to India, U.S. Navy to help in repairs (By JC Gotinga)

(UPDATED) With the BRP Ramon Alcaraz staying behind in India for repairs, the BRP Davao del Sur will sail to the Philippines without an escort, carrying 20 Filipino repatriates and a cargo of 200,000 face masks 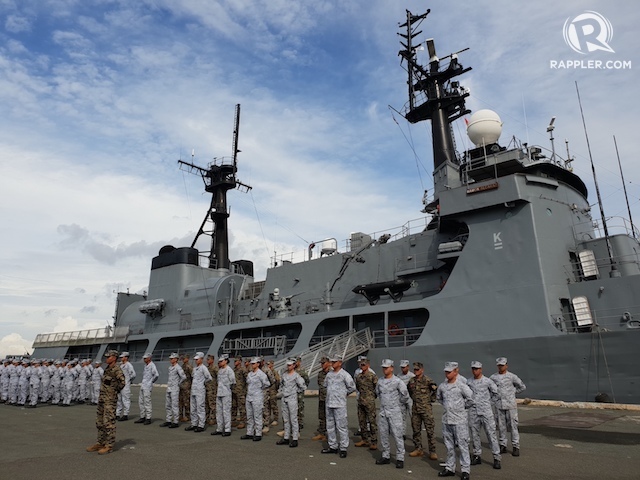 PATROL SHIP. The BRP Ramon Alcaraz and its crew of around 200 sailors from the Philippine Navy before sailing from Manila to Thailand on August 28, 2019, to join the first ever ASEAN-U.S. Maritime Exercise. File photo by JC Gotinga/Rappler

“Luckily, the damage sustained was a minor one and the ship was able to sail into port under its own power, and unassisted,” Lorenzana said in a statement.

Of the two sailors who suffered second degree burns during the mishap, one is in an Indian medical facility for treatment, and the other is in the vessel’s sickbay, Lorenzana added.

Because the BRP Ramon Alcaraz was acquired from the US, the US Navy’s Naval Systems Command (NAVSEA) will assist in repairing it, the defense chief said.

“We will also use existing diplomatic mechanisms and our defense cooperation agreement with India to facilitate and expedite work on the ship so that it can return to the [Philippines] in the shortest time possible,” he added.

The main engine room of the BRP Ramon Alcaraz caught fire about 5 hours after leaving the Port of Cochin, India, on Thursday evening, May 7. The ship’s response team was able to put out the fire after 10 minutes, the Philippine Navy reported.

Naval engineers assessed the ship’s main propulsion system for damage, and whether it could have continued its voyage to the Philippines alongside the larger BRP Davao del Sur, a landing dock ship.

With the damaged patrol ship staying behind for repairs, the BRP Davao del Sur will proceed sailing to the Philippines by itself. Onboard this transport ship are around 20 Filipino repatriates and a cargo of 200,000 face masks.

Faster, more nimble, and better armed, the BRP Ramon Alcaraz was supposed to escort the BRP Davao del Sur as it ferries the Filipinos who were stranded in India because of the coronavirus pandemic, and the 59 boxes containing the face masks. The masks were sourced in India by a Filipino businessman, who is donating a total of 1 million pieces to the government.

Both vessels arrived in India on April 29 from Oman, where they were deployed in January supposedly to help repatriate Filipinos from the Middle East. A US airstrike that killed an Iranian military general in Iraq at the time threatened to plunge the region into increased violence.

Tensions in the Middle East have since cooled and a repatriation was unnecessary.

The BRP Ramon Alcaraz is one of 3 Hamilton-class cutters acquired from the US Coast Guard. It was commissioned to the Philippine Fleet in 2013.

https://www.rappler.com/nation/260411-philippine-navy-ship-returns-india-us-navy-help-repairs
Posted by Retired Analyst at 9:34 AM