'As we struggle against a pandemic that poses a real threat to our lives, we must not also risk losing our national patrimony,' says former foreign secretary Albert del Rosario 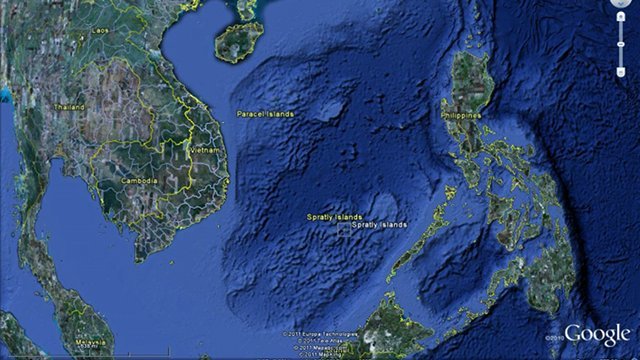 TENSION. Here is a file image of the Spratly and Paracel island groups in the South China Sea. File photo from Google Earth

Former foreign secretary Albert del Rosario called on the Duterte government to file a diplomatic protest against China's creation of two districts in the South China Sea, saying the Philippines must be "extra vigilant" in defending its sovereign rights even as it combats the coronavirus pandemic.

"We...respectfully urge our government to protest this recent action of China, as it rightly did over the sinking of the Vietnamese fishing boat on April 8, 2020," Del Rosario said in a statement on Sunday night, April 19.

"These recent events in the South China Sea remind us Filipinos to be eternally vigilant in the defense of our country's territory and sovereign rights even as we confront a very grave threat as COVID-19," he added.

Del Rosario – under whose leadership the Philippines took China to court and won – said Beijing's recent moves only showed it "has been relentless in exploiting the COVID-19 pandemic as it continues to pursue its illegal and expansive claims in the South China Sea."

"As we struggle against a pandemic that poses a real threat to our lives, we must not also risk losing our national patrimony upheld by international law and meant for present and future generations of Filipinos," he said.

What did China do? China Global Television Network earlier reported Beijing established a Paracel (Xisha) district and a Spratlys (Nansha) district, to be under the control of the Chinese city of Sansha.

The move follows its efforts to boost its claims in the South China Sea, over which the Philippines and other Southeast Asian states likewise have claims.

Prior to the creation of the new districts, a China Coast Guard ship harassed and sank a Vietnamese boat in the maritime area, an incident the Philippines protested. Beijing also established two research stations in its artificial islands in Fiery Cross and Subi reefs.

"In these trying times, we also respectfully urge the Chinese leadership to uphold global unity and mutual trust, and not to engage in needless provocations that may only be seen as abusive and may worsen the situation currently being confronted by the world," Del Rosario said.

The United States earlier warned China "to stop exploiting the distraction or vulnerability of other states to expand its unlawful claims in the South China Sea" as countries are preoccupied with fighting the pandemic.

Vietnam, which claims the Paracels, protested China's creation of districts in the South China Sea on Monday, April 20, calling it a "serious violation" of its sovereignty.