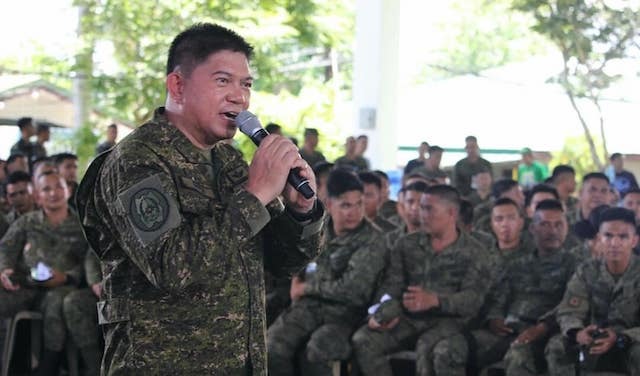 MANILA, Philippines (UPDATED) – President Rodrigo Duterte has named the general on top of anti-insurgency operations in Bicol, Mimaropa, and Calabarzon as the next Philippine Army chief.

"He is competent. He went through all the army commands up to area command. I am sure he will perform well as army chief," said Lorenzana.

The Armed Forces of the Philippines said in a statement that during Gapay's time as Solcom commander, key communist leaders were neutralized and the armed capability of the New People's Army was "significantly reduced." Solcom's operations also supposedly led to a spike in NPA surrenderees in the 3 regions.

In the days leading to his appointment, Gapay has been busy with relief and rescue operations for Typhoon Tisoy (Kammuri), which affected Bicol, his command's area of operation.

Davao connection. Gapay also had the chance to serve in the President's hometown, Davao City. In December 2016, he became Eastern Mindanao Command deputy commander. During this time, he led the Joint Task Force Haribon, in charge of securing the Mega Davao area after the September 2016 bombing of the Roxas night market.

He was also in charge of security at the launch of the Philippines' chairmanship of the Association of Southeast Asian Nations held in Davao City in 2017.

Gapay was topnotcher of his class at the Philippine Military Academy, the powerful Sinagtala Class of 1986. His classmates include former police chiefs Ronald dela Rosa, Oscar Albayalde, and PNP officer-in-charge Archie Gamboa.

Gapay also served as commander of the army's Mechanized Division.