‘Crumbling democracy’: Groups call for end to attacks against the youth

From Rappler (Aug 16, 2019): ‘Crumbling democracy’: Groups call for end to attacks against the youth 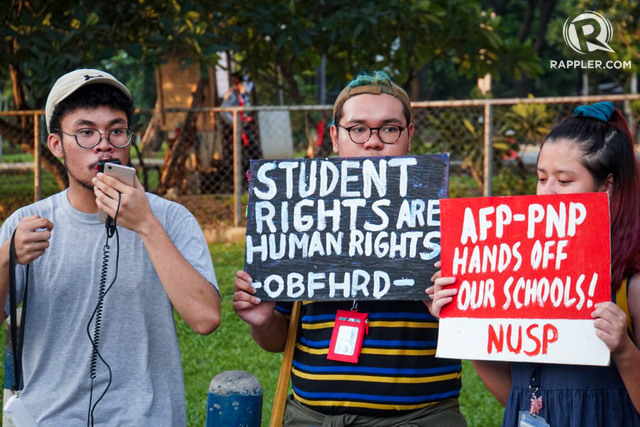 Undeterred by allegations thrown at activists, various youth groups from different universities in Metro Manila took to the streets to condemn red-tagging allegations and attacks against young Filipinos on Wednesday, August 14.

Attacks against the youth

Among these are the proposed revival of the mandatory Reserve Officers’ Training Corps (ROTC), falsification of kidnapping cases due to involvement with progressive groups, and the proposal to increase police and military presence in schools.

On the morning of the protest, Anakbayan youth activist Alicia Lucena publicly denied that she was kidnapped, stating that she does not want to be used to justify the military agenda to put police in schools. Kidnapping charges were placed by the Philippine National Police against Anakbayan when Lucena‘s mother reported her leaving home shortly after joining the militant group.

“If you're from Anakbayan or Akbayan, who are in opposition with the government, [you] can literally be given these false cases of kidnapping. It's like a catch-all: if you infringe on the rights of student activists, the youth will be punished as well,” warned Hen Namoca of One Big Fight for Human Rights and Democracy (OBFHRD) during the protest outside Ateneo de Manila University.

UP student councils reiterated in their unity statement that military presence in schools will endanger students’ right to organize and protest, especially in universities where “academic freedom and collective decisiveness shall continuously thrive.”

“The intrusion of these state forces inside the university will result to massive surveillance and monitoring on the students, especially leaders and vocal critics, in their attempt to pacify the ever growing resistance among our ranks,” they said.

Anakbayan also pointed out in its statement that the government’s attacks against the youth is not new, remembering the Red October plot that tagged universities where students are allegedly being recruited to help in Duterte’s ouster. Schools had fired back at the Armed Forces of the Philippines for “red-tagging” their students.

Not just the youth

Aside from the youth, groups pointed out other sectors were also under threat. Among the nation's pervasive issues are the rise of killings in Negros Island as part of Oplan Sauron and innocent victims of EJKs as part of Oplan Tokhang. These are campaigns by the Armed Forces of the Philippines (AFP) against communist rebels and the Philippine National Police (PNP) against illegal drug pushers, respectively.

Youth groups stressed attacks against marginalized sectors, especially the youth, show signs of a failing democracy. They highlighted the need for the Filipino people to speak up against injustice, pointing out how the oppression of student rights may later lead to the oppression of the citizens.

As the sole youth representative in Congress, Kabataan Partylist urged Dela Rosa to stop using his power to malign youth groups for expressing their right to dissent.

“We call for Senator Dela Rosa along with the PNP and AFP to end such defamatory activities that discredit the legitimate advocacies and demands of the youth, and furthermore put the youth's lives in danger,” they said

Panday Sining-College of Saint Benilde echoed the call, pointing out how the combined efforts of AFP and PNP have “left thousands of families without parents and ripped countless children from their families’ embrace.”

To assert students’ rights to academic freedom and organization, the Student Regent of the University of the Philippines has declared August 20 as the UP Day of Walkout and Action for all UP campuses in the country.

https://www.rappler.com/move-ph/237838-crumbling-democracy-groups-call-end-attacks-against-youth
Posted by Retired Analyst at 9:26 AM