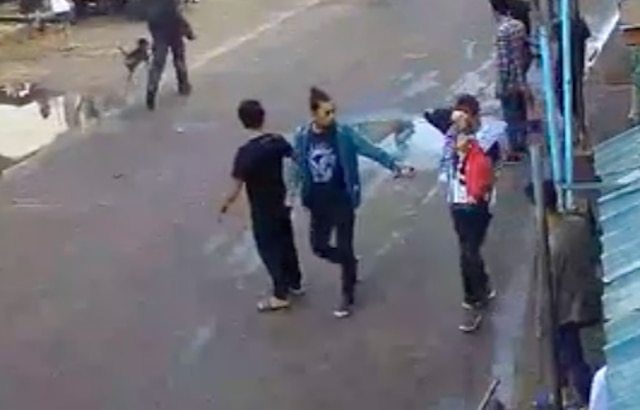 WRONG PERSON? The military says the man wearing a bun and a blue-green jacket is actually a grade 11 student. Westmincom video screenshot

(UPDATED) – The man suspected to be the brother of an Abu Sayyaf leader involved in the Jolo Cathedral bombing is actually an 18-year-old Grade 11 student, the military announced on Wednesday, January 30.

According to the Armed Forces of the Philippines (AFP) Western Mindanao Command (Westmincom), the man in CCTV videos they earlier released – who was subject of intense scrutiny – is the same man in a blue-green jacket wearing a bun.


He was identified as Alshaber Arbi, 18 years old, and a Grade 11 student of Kalingalan Caluang National High School. (WATCH: Outside Jolo Cathedral during the bombing)

Arbi is suspected of remotely detonating a bomb in the cathedral. Just before the 2nd bomb exploded, he was seen in one of the CCTV clips extending his left hand, with a small item in it, to a companion.

It turns out, the companion who stood beside him was a teacher at Kalingalan Caluang National High School, identified as Gerry Isnajil. Both turned themselves in to cops on Wednesday to clear their name.

Two others yield: Two other persons of interest in the CCTV clips released by the military turned themselves in: 24-year-old Alsimar Mohammad Albi and 17-year-old Abdulzam Albi.

According to Westmincom, the two were at a pharmacy to buy medicine for Alsimar's mother who is confined at the Integrated Provincial Health Office in Sulu.

Just after they bought the medicine, the explosions happened, prompting them to run away.

The latter two were not identified by the Westmincom in the clips they earlier released.

"The two said that they are not familiar with the identities of the suspects and their purpose of coming out is to clear their names fearing that authorities will hunt them down," the Westmincom said in a statement.

The 4 are now being questioned by the Special Investigation Task Group formed to probe the cathedral twin blasts.

In a press briefing on Thursday, January 31, Philippine National Police spokesman Bernard Banac announced that all of them have been cleared from their 'persons of interest' list, after convincing the Special Investigation Task Group that they were innocent.