'To preserve the honor, integrity, and the dignity of the whole AFP, and most importantly, to preserve the lives of our soldiers who have offered their lives to serve out nation,' says Magdalo Representative Gary Alejano 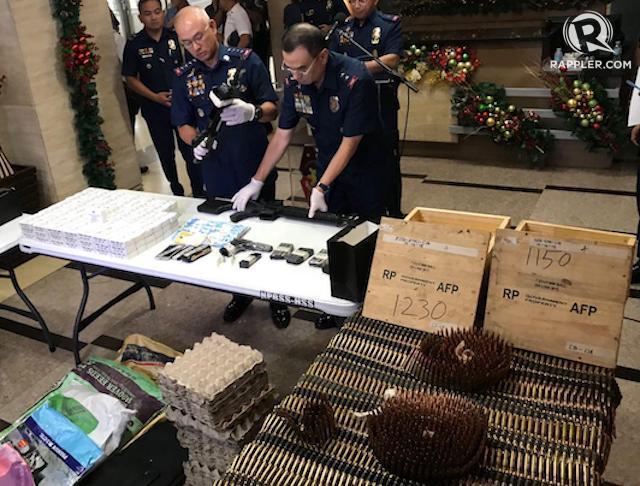 SMUGGLED FROM WITHIN? The confiscated bullets and guns, linked to the military, are presented in Camp Crame on December 17. Photo by Rambo Talabong/Rappler

A House investigation into the reported sale of Armed Forces of the Philippines' firearms to terrorists and rebels was sought on Thursday, December 20.

“To preserve the honor, integrity, and the dignity of the whole AFP, and most importantly, to preserve the lives of our soldiers who have offered their lives to serve out nation, the House of Representatives should immediately act on this very alarming incident,” Alejano said in his resolution.

The lawmaker said the “deeply disturbing” incident is “very reminiscent” of violations committed during previous administrations.

It was one of the main reasons why the Magdalo group, led by then Philippine Navy Lieutenant Senior Grade Antonio Trillanes IV, launched the Oakwood Mutiny in 2003 against alleged anomalies in the Arroyo administration and the military.

“[It] was one of the main reasons why the Magdalo staged a protest in 2003 where we asserted that unscrupulous individuals in government has been selling firearms to anti-government forces enriching themselves at the expense of the lives of our soldiers,” said Alejano, who also took part in that mutiny.

“The chronic problem of corruption in the military should be addressed immediately in order to weed out the unscrupulous members of the organization,” he added.

Police have seized around P1.2 million worth of firearms and ammunition from arrested "gunrunners" of the Maute and Abu Sayyaf Group.

Philippine National Police chief Director General Oscar Albayalde had said that the two suspects, Edgardo and Rosemarie Medel, admitted to getting the multimillion worth of firearms and ammunition from the military, particularly in Fort Magsaysay, Nueva Ecija, headquarters of the Army's 7th Infantry Division.

The Maute Group was behind the Marawi siege in 2017, and the Abu Sayyaf Group is the suspected orchestrator of a slew of bombings in Mindanao.

https://www.rappler.com/nation/219395-magdalo-seeks-house-probe-alleged-afp-arms-sale-rebels
Posted by Retired Analyst at 7:44 AM