From the often pro-Communist Party of the Philippines (CPP) online publication the Davao Today (May 29): Captured NPA leader transferred to Davao City to face charges 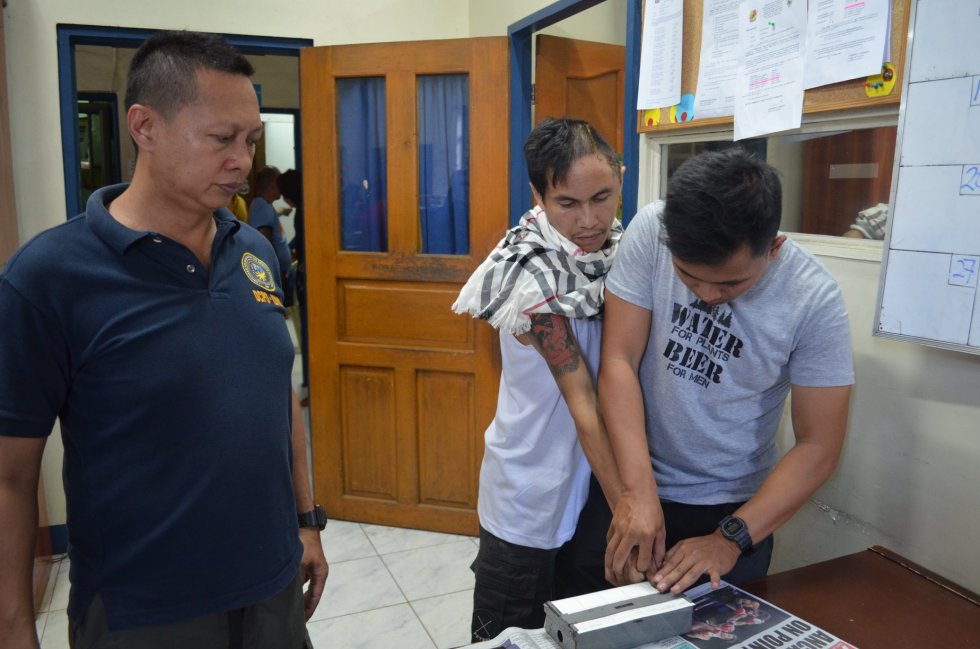 DCPO Director, Police Senior Superintendent Alexander Tagum told media that Cañete was transferred here “​since most of the charges against him are filed in Davao City regional trial court​”​.

Tagum said Cañete is facing 12 different cases, five of which are non-bailable crimes including illegal detention and four cases of murder.
Cañete is also facing a case of robbery ​in​ b​a​nd with P100,000 bail, four different cases of attempted murder amounting to P400,00 bail, frustrated murder with around P80,000 bail bond recommended, and an alias warrant amounting to P50,000 bail bond.

“He [Cañete] was referred to us so that we will serve the warrant of arrest to him and we will be also in charge of returning those warrants to the courts that handle the cases that involve Commander Jinggoy,” said Tagum.

Tagum added they will immediately process all the cases filed against the NPA leader.

Tagum refused to go into details but assured they will implement a stricter security measures while Cañete is under their custody.

“Commander Jinggoy will also face the same level of security measures we enforced when Maute patriarch, Mr. Cayamora, was apprehended while he is under the custody of DCPO,” Tagum added.

Cañete was released from the intensive care unit of Don Carlos Doctors Hospital and later brought to Don Carlos Municipal Police Station on Monday, May 28.

Karapatan Southern Mindanao spokesperon Jay Apiag said the police arrest and detention was hasty and could be harmful for Cañete who underwent a major brain surgery last May 11 after sustaining head and body injuries in a clash with government troops on May 10 at Barangay Kipilas in Kitaotao town, Bukidnon.

The group said no doctor or health personnel checked on Cañete’s condition inside the police jail.

Apiag said police and military must be held liable with whatever happens to Cañete under their custody.

Meanwhile, the ​Exodus for Justice and Peace,​ which acted as third party facilitator during NPA release​s​ of prisoners of war, disputed Cañete’s transfer to a regular jail, citing that he is a hors de combat who needs medical care.

“We contest this arrest, as Cañete is a hors de combat, a wounded combatant that should be tended first for his critical medical condition as stipulated under the CARHRIHL (Comprehensive Agreement on Respect for Human Rights and International Humanitarian Law) signed by the government and the NDFP (National Democratic Front of the Philippines),” EJP said.

​Also, it said the arrest and forced travel of Cañete ​”​is worrisome as it has implications to the ongoing back channel talks for the resumption of peace talks​”​.

According to CARHRIHL, “the wounded and the sick shall be collected and cared for by the party to the armed conflict which has them in its custody or responsibility.”

The CARHRIHL is the first of four substantive agenda slated in the GRP-NDFP peace negotiations signed in 1998 which obligated both parties engaged in the civil war to respect and adhere to international humanitarian law.

NDFP Senior Adviser Luis Jalandoni condemned​ the arrest of Cañete in a tweet on Tuesday morning.

“[We] condemn in the strongest terms the military’s arresting hors de combat Z​aldy C​anete , who suffered a traumatic head injury and was recuperating after an eleven hour operation in a hospital in Bukidnon. This is a ​flagrant violation of International Laws of War and CARHRIHL!” Jalandoni said.

The Armed Forces of the Philippines-Eastern Mindanao Command announced that Cañete also known as Ka Jinggoy was apprehended by joint military and police forces last May 12 at Don Carlos Doctors Hospital.

The ​​military said Cañete replaced the late Leoncio Pitao also known as Comannder Parago as leader of the 1st Pulang Bagani Command of the NPA that operates in the boundary of Bukidnon, Davao del Norte and the mountainous parts of Davao City.

http://davaotoday.com/main/politics/captured-npa-leader-transferred-to-davao-city-to-face-charges/
Posted by Retired Analyst at 5:10 AM