From the Philippine Star (Apr 12): Mindanao residents urged to intensify support for BBL 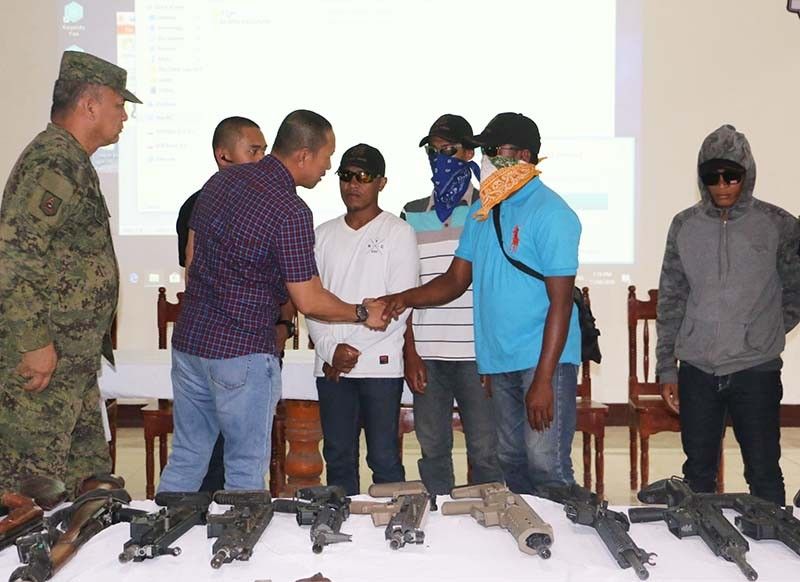 Gov. Esmael Mangudadatu shakes hand with one of the four militant bomb makers who surrendered on Wednesday to Major Gen. Arnel Dela Vega of the Army's 6th Infantry Division.
Officials urged southerners Thursday to intensify support for the approval of the draft Bangsamoro Basic Law, for them a sure solution to misguided Islamic militancy now plaguing Mindanao.

The appeals were aired separately by Regional Governor Mujiv Hataman of the Autonomous Region in Muslim Mindanao and Maguindanao Gov. Esmael Mangudadatu following the surrender on Wednesday to Major Gen. Arnel Dela Vega of the 6th Infantry Division of four bomb makers of the outlawed Bangsamoro Islamic Freedom Fighters.

Militants Ahmed, Malik, Nazzer and Muktar, all in their early 20s, have confessed to their having gone through clandestine training on fabrication of improvised explosive devices by foreign-trained terrorists in the ranks of the BIFF.
The BIFF uses the Islamic State flag as revolutionary banner. It has three factions separately led by radical clerics Toraife, Bongos and Karialan, now all wanted for multiple murder, frustrated murder, arson and other crimes.

The four men agreed to return to the fold of law through the intercession of Dela Vega and the commanding officer of the 2nd Mechanize Battalion, Lt. Col. Alvin Iyog.

“We in the provincial government of Maguindanao were elated with their decision to return to the fold of law through the efforts of the 6th ID,” Mangudadatu said Thursday.

Mangudadatu personally assured Ahmed, Malik, Nazzer and Muktar livelihood and education support as they turned in firearms and anti-tank rockets to Dela Vega during a simple surrender rite Wednesday afternoon at 6th ID’s headquarters in Camp Siongco in Datu Odin Sinsuat town in Maguindanao.
Mangudadatu said Thursday the best magnet that can attract local IS-inspired blocs inciting hatred towards government, using neglect, poverty and underdevelopment as talking points, is a duly-approved BBL, now being deliberated on by Congress.

The BBL, jointly crafted by representatives of the government and the Moro Islamic Liberation Front, is a product of 18 years of negotiations meant to put diplomatic closure to the Moro uprising since the late 1960s.

He said he is convinced that all three factions in the BIFF will disband and help in regional governance once their leaders feel the sincerity of the national government in providing socio-economic and political empowerment to Moro communities.

The surrender on Wednesday of the four BIFF bomb makers, who admitted participation in recent roadside bombings in the province, was the first from the terror group since it emerged seven years ago.

Hataman, now is his second term as ARMM regional governor, said Thursday he will direct agencies under his office to initiate necessary interventions needed in ushering the four militants back into mainstream society.

Like Mangudadatu, Hataman is also certain that the approval of the BBL by Congress will attract more militants fighting the government to pursue peaceful means of addressing domestic socio-economic woes such as involvement in governance and extensive advocacy for political reforms.

“The BBL will restore the dignity and honor of the Moro people in Mindanao by giving them chance to chart their own socio-economic programs, provide them with political empowerment to address regional peace and security issues under the international self-determination, self governance doctrine,” Hataman said.

Hataman said in his province, Basilan, his administration, the Western Mindanao Command, the Regional Police-ARMM and provincial officials jointly secured the surrender of more than 100 notorious Abu Sayyaf militants in the past 20 months through diplomatic maneuvers capped off with infrastructure projects and socio-economic programs for people in hostile territories.

Hataman said he is expecting the surrender in the coming months of more BIFF gunmen in Maguindanao.

“We have no doubt that a BBL duly-enacted into law will bring in peace and sustainable development in the autonomous region,” Hataman said.

The bill, once approved and ratified via a plebiscite, will pave the way for the replacement of ARMM with a more empowered MILF-led Bangsamoro regional entity.

“We are ready to facilitate transition from ARMM to a Bangsamoro regional self-governing political entity once we have that law,” Hataman said.
https://www.philstar.com/nation/2018/04/12/1805266/mindanao-residents-urged-intensify-support-bbl
Posted by Retired Analyst at 3:33 PM