From the Voice of Americ (Mar 2): US Carrier Group Headed to S. China Sea Waters Claimed by China 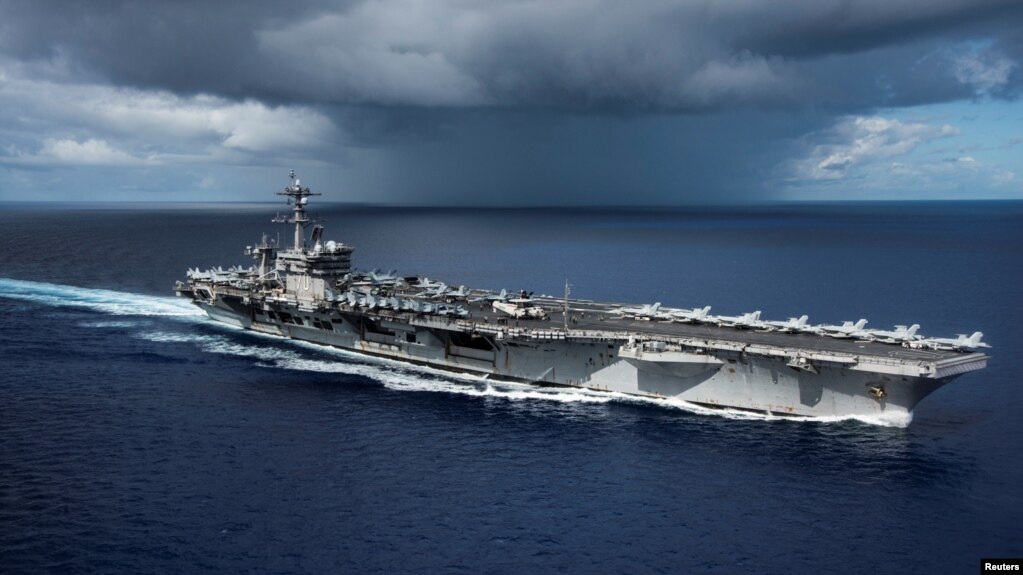 A U.S. aircraft carrier group is preparing to sail through the contested South China Sea later this month, and observers expect an angry Beijing to register its opposition and quicken its militarization of small islands in the region.

The group of ships led by the USS Carl Vinson aircraft carrier and guided missile destroyer USS Michael Murphy is plying the South China Sea after a mid-February port call in Manila where some of the 5,500 crew members offered humanitarian aid, the U.S. Navy said in a statement.

A U.S. Navy statement says the group came for, “promoting freedom of the seas and enhancing regional security,” as well as working with allies in the region.

That’s not the message likely to be received by Beijing, which regards about 90 percent of the 3.5 million-square-kilometer waterway as its own.

Those claims are disputed by five militarily weaker claimants: Brunei, Malaysia, the Philippines, Taiwan and Vietnam. The United States does not claim territory in the region, but regularly patrols the waters to ensure that they remain open for commercial traffic.

“I think it’s important to show to the world that the South China Sea is an international water, that it’s not a private lake of China, and only the United States can challenge China or provide balance of power in the South China Sea,” Philippine Congressman Gary Alejano said. 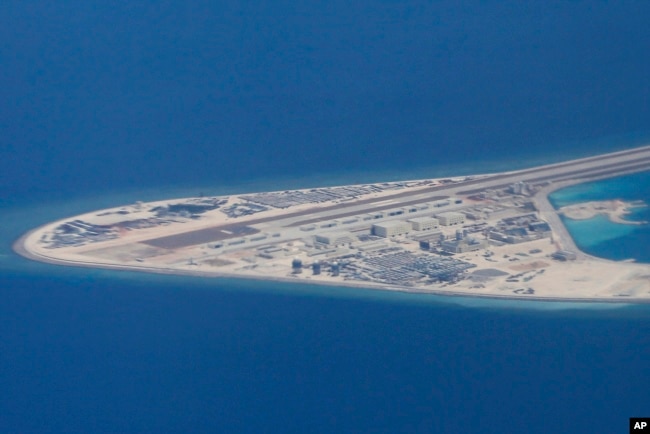 FILE - An airstrip and buildings on China's man-made Subi Reef in the Spratly chain of islands in the South China Sea are seen from a Philippine Air Force C-130, April 21, 2017.

China has built up three features in the sea’s Spratly Islands since 2013 to accommodate fighter planes and radar systems, one American think tank believes. It also controls the 130-feature Paracel Islands disputed by Vietnam.

U.S. maneuvers, which are taking place roughly once every two months under President Donald Trump, would spark a tightening of China’s positions in the name of “defensive purposes,” said Collin Koh, a maritime security research fellow at Nanyang Technological University in Singapore.

“What they’re looking for is an excuse to ramp up the level of defense infrastructure on the features that it’s built up and occupied since 2013,” Graham said. “What they want I think is to derive the indirect benefit of characterizing the U.S. as provoking [them] into doing what they wanted to do all along.”

The People’s Liberation Army Air Force has the option of basing fighter planes on the larger Spratly Islands, where all other claimant governments have nearby holdings, analysts say.

However, maintenance of aircraft would cost a lot in utilities, said Alexander Huang, strategic studies professor at Tamkang University in Taiwan. 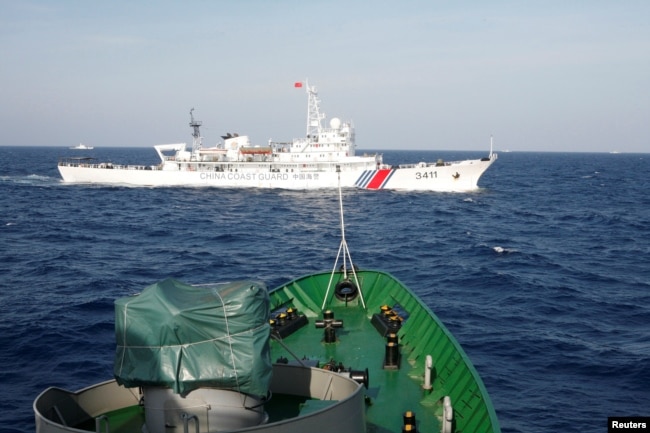 The USS Carl Vinson group is due to dock at Vietnam’s port in Da Nang March 5-9 following an upbeat visit to Vietnam by U.S. Defense Secretary Jim Mattis in January. The carrier will be the largest and most powerful U.S. military ship to reach a Vietnamese port, said Carl Thayer, emeritus professor with the University of New South Wales in Australia.

Vietnam is the most outspoken claimant against Chinese maritime expansion but has struggled for U.S. support because of their own war in the 1970s. Hanoi supports U.S. naval presence in the South China Sea to advance "regional peace and stability," Thayer said in a commentary February 22.

Southeast Asian countries as well as Taiwan have been pushing for more U.S. presence as China expands at sea, backed by the world’s third strongest armed forces after the United States and Russia.

But Malaysia, the Philippines and Vietnam are working with both China and the United States to keep the peace as well as economic relations with two vital trade partners. Their support for the USS Carl Vinson will be muted, but excited, analysts say.

“Reactions from other claimants would be in favor or that presence except China,” Huang said.

“I don’t think there’s a specific quarrel between Washington and Hanoi and even though [Philippines] President [Rodrigo] Duterte had expressed some kind of collaboration possibility with China, I think the Philippines in general would appreciate American strong presence.”