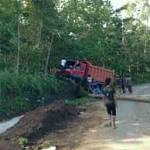 Three men on board a truck involved in a government project were ambushed and killed by suspected Abu Sayyaf members in Basilan province on Wednesday morning.

Police said the ambush happened at the boundary of Tipo-Tipo and Lamitan towns in Barangay Baas at past 10 a.m..

Superintendent Christopher Panapan, chief of the Lamitan City police, clarified that the victims were not DPWH employees, but merely contracted for one of the project's of the agency.

He said investigators were looking into extortion as a possible motive for the attack.

The victims were bound for Isabela town when ambushed by armed men believed to be members of the Abu Sayyaf.

Pursuit operations are ongoing against the bandits.

Tipo-Tipo Mayor Ingatun-Lukman G. Istarul, meanwhile, revealed that the DPWH has long been requesting security from the local government but has yet to be given one.