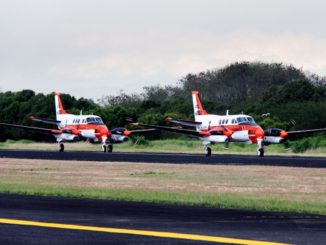 The Japanese government has decided to officially donate the two currently being leased and three upcoming TC-90 aircraft to the Philippine Navy.

This was conveyed by Japanese Defense Minister Onodera to National Defense Secretary Delfin Lorenzana during their bilateral meeting at the sidelines of 4th ASEAN Defense Ministers Meeting (ADMM) Plus in Clark, Pampanga on October 23.

According to Japanese Ministry of Defense this is the first instance that excess defense equipment will be transferred to another country completely free of charge.

The earlier agreement between Japan and Philippines was a total of 5 TC-90 aircraft will be rented at a friendly price, however, with the change in Japanese regulations and request from Philippine government these aircraft will be given for free.

These aircraft were provided by Japan to help Philippines monitor its vast maritime territories and also assist in Humanitarian Assistance and Disaster Relief (HADR).