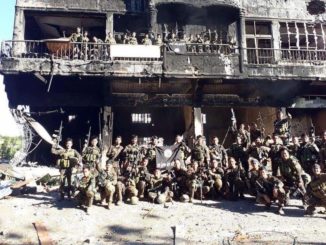 8th Scout Ranger Company “Destruere Hostis Deus” Latin for “Destroy the enemy of God” of First Scout Ranger Regiment commonly known as Scout Rangers of Philippine Army Special Operations Command was among the units responsible for the death of Isnilon Hapilon and Omar Maute before dawn of October 16.

Destroyer, the commander of 8th Scout Ranger Company told the story on how they neutralized the two top terrorist leaders through Scout Ranger Books Facebook page.

According to Destroyer his company and other support units have already cordoned the area of a group of terrorists not knowing Hapilon and Maute are part of the group.

Another team with same composition was deployed on the other end of the road.

At 1:30, one terrorist crossed. “E alerto ang Ranger, boom kunana. Tumba ang isang terorista,” he added. Not yet knowing it was Maute.

According to the narration, several terrorists tried to recover the bodies of their leaders.