Father of Maute brothers dies due to health reasons – BJMP

From Rappler (Aug 27): Father of Maute brothers dies due to health reasons – BJMP 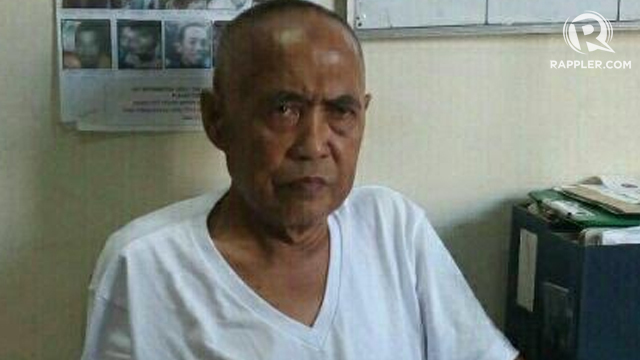 PATRIARCH. Cayamora Maute after his arrest on June 6, 2017 in Davao City.

(3rd UPDATE) – Cayamora Maute, the father of the notorious Marawi-based Maute brothers, died on Sunday, August 27, according to the Bureau of Jail Management and Penology (BJMP).
Senior Inspector Xavier Solda, BJMP spokesman, told Rappler that the 64-year-old Maute was rushed to the Taguig-Pateros District Hospital past 3 pm on Sunday, already in critical condition. He was declared dead on arrival.

Before he was rushed to the hospital, Maute had difficulty breathing and felt weak at around 4:30 am, according to the BJMP. He was given antibiotics at 10:20 am, then complained again of difficulty in breathing at around 12:30 pm, prompting the jail nurse to conduct nebulization twice.

(Initially, the warden said his blood pressure shot up and he had difficulty breathing, his pulse slowed down. Upon the assessment and recommendation of our medical team, we rushed him to the nearest hospital. He died past 3 pm.)

The BJMP and the augmentation team from the Philippine National Police (PNP) were there at the hospital, according to Solda.

Solda also said the Maute patriarch already had hepatitis, diabetes, pneumonia, and hypertension even before he was detained, based on the medical examination conducted when he arrived at Camp Bagong Diwa in Taguig City last June 8.

"Last August 9, he [was] complaining of body weakening and manas (swollen limbs). He was in full monitoring and medication – antibiotics and diuretics – for a week until he regained his strength and his vital signs were normalized.   August 13, he was diagnosed with hypertension type 2, diabetes type 2 uncontrolled, gastroenteritis, and ascites," Solda added in a separate statement sent to media.

Following Maute's death, his body was brought back to the BJMP complex "for short viewing of his immediate family," said Solda. His relatives then left with his remains at 7:15 pm.

In a statement on Sunday evening, Armed Forces of the Philippines (AFP) chief General Eduardo Año said the military has yet to receive a formal report on Maute's death, and only learned about it from media reports.

"This is an unfortunate incident for his family; but more so to the victims of terrorism in Marawi and their relatives who are awaiting justice and expecting that Mr Cayamora would answer/atone for his involvement in the Marawi rebellion," Año also said.

The Maute patriarch was accused of providing funding and logistical support for the terror-linked activities of his sons. (READ: Terror in Mindanao: The Mautes of Marawi)

The Maute Group attacked Marawi City, Lanao del Sur last May 23, prompting President Rodrigo Duterte to declare martial law in the entire Mindanao for 60 days. The martial law declaration has since been extended until December 31. (READ: How a military raid triggered Marawi attacks)

https://www.rappler.com/nation/180259-cayamora-maute-father-death-health-reasons
Posted by Retired Analyst at 11:03 AM