A decade after his release from prison, a former henchman of ISIS' leader in Asia predicts the battle unfolding in the southern Philippines city of Marawi won't stop there.

Abu Jihad -- not his real name -- retains a seriousness about him. His hair is short and neat, and these days streaked with white. He sports a neat goatee and is considered and thoughtful when he speaks.

He predicts the Marawi siege is only the beginning of a wider jihadist war in the region.

Under the overall command of Isnilon Hapilon, the wiry leader of the Filipino jihadi Abu Sayyaf Group (ASG), militants have held Marawi -- a city of 200,000 -- for over a month, defiantly facing down government troops and daily airstrikes.

The intense, bloody battle, which has so far claimed the lives of over 70 soldiers and caused hundreds of thousands to flee, has seen much of the city reduced to rubble as Philippines forces attempt to drive out militants, street by street. Almost 30 civilians have also died in the fighting.

Around 300 militants from as many as 14 different jihadist groups have died in the siege, which started on May 23 and appeared to catch the government off guard. 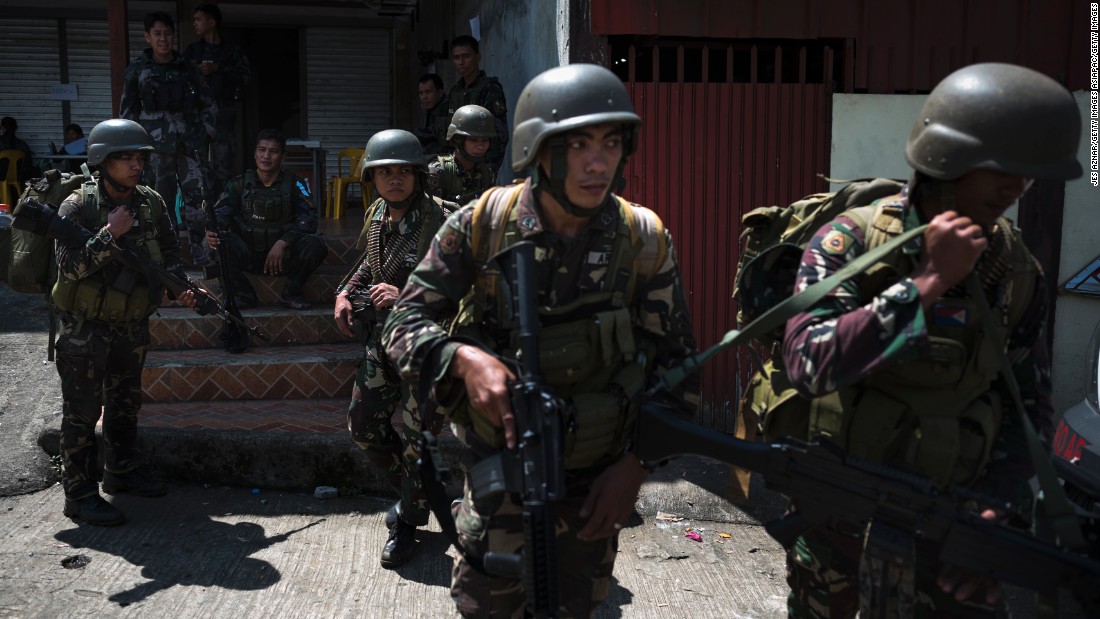 "Soldiers being deployed to the front lines of Marawi are transported to safety on June 3, 2017, over a week after the siege began."

Soldiers being deployed to the front lines of Marawi are transported to safety on June 3, 2017, over a week after the siege began.

For years a member of ASG, one of the most ruthless militant organizations in a part of the Philippines known for its long history of extremism, and a friend and brother-in-arms of Hapilon, Abu Jihad is now concerned the militant group's recent successes will embolden further attacks.

He tells CNN his former friend's brutality "will not end only in Marawi."

Now a reformed jihadi who denounced militancy while imprisoned, he is desperate to use his life's experience to warn against the excesses of his former comrades. He requests anonymity from CNN -- he is fearful his enemies will find him and kill him for speaking out against violent jihad.

"They might succeed (in holding Marawi)" he tells CNN from an undisclosed location, his face obscured to prevent identification.

"But they also know, in case they might not succeed (in holding Marawi), at least they have been tested. They have tried." 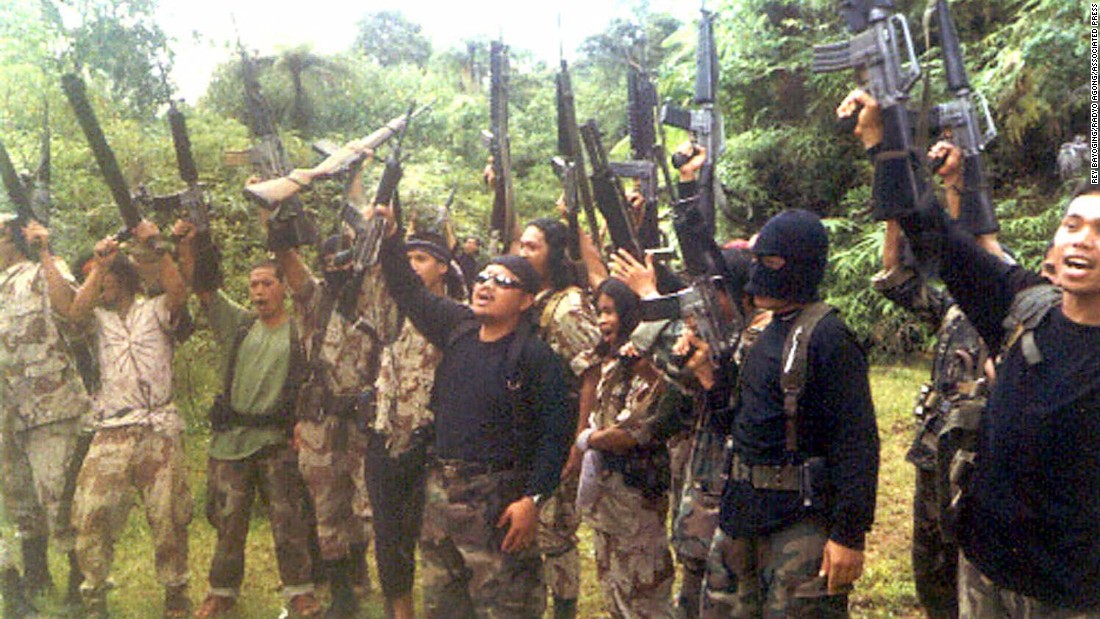 "Members of the extremist group, Abu Sayyaf Group (ASG) raise their firearms as they shout slogans in March, 2000 at their hideout in Basilan, 890 kilometers (560 miles) southeast of Manila. Abu Jihad is the masked militant in the foreground of the shot.

Abu Jihad called Hapilon -- who has been named by ISIS as the emir of the so-called caliphate's Southeast Asian province -- a friend for years. Abu Jihad has since renounced violence.

He says he fought alongside Hapilon in battles against the Armed Forces of the Philippines (AFP) and that the ideological, ambitious jihadi is one of the "boldest fighters" in ASG.

ISIS in the Philippines

"When AFP troops were about to move to take our camp, the (leaders) conducted a shura (council) to decide whether they will abandon the camp or fight to their last.

"It (was) only Hapilon who told the group that he will fight until they die in that camp."

"When I spoke to him many years ago, he always thought that killing non-Muslims is considered 'ibada,' or worship. That it would satisfy god -- make Allah happy. And I was shocked."

Unverified reports from Marawi suggest Hapilon may have fled already, but Abu Jihad says he wouldn't be surprised if his former comrade died fighting to hold the territory.

"I spoke to Hapilon many times and he always told me that he desires to, if he is to die... he wants to die fighting in an urban area."

The ability to bring together disparate militant groups -- separated along ethnic lines -- under the black banner of ISIS, has demonstrated Hapilon's success as a militant commander, says Abu Jihad.

"It has never happened before that militant groups in the Philippines have come together," he says, citing long experience of the difficulties in uniting the area's tribal groups, like the Maranao and the inhabitants of his home island of Basilan.

A life made for militancy


Abu Jihad grew up on Basilan, an island to the south of Marawi that is home to Hapilon's group.
He was an ideal candidate for a life of jihad.

He studied at Middle East-funded madrassas in Marawi, one of the Philippines' only Muslim-majority cities, and spent his younger years hearing about the struggle of Afghanistan's mujahideen, who were then fighting to free their country from the grip of Soviet occupation.

He says that today, most young militants join groups such as Abu Sayyaf because it is an "easy way to earn money." But he insists people of his generation had different reasons for joining up. It was a "noble task," he says.

"During our generation we always, we always considered the welfare of the community. The civilians. We love to defend the people," he says.

He joined ASG in the 1980s, before it had really made its impact on the area.

But as these drifted towards peace and reconciliation with the government, ASG struck out on its own path.

Wrestling with his conscience

Abu Jihad first began to question his role in ASG in the early 1990s when the group took the wife of prominent Davao City banker Dante Abaca hostage and dragged her to Basilan, its island stronghold.

"It was the first kidnapping operation perpetrated by some members of the organization," he said, something that almost led to his speaking out against the tactic.

"We almost condemned that," he said. But he held his tongue, party out of deference to the group's then-leader, Abdul Rajak Janjalani, who told him the act was justified by the Koran.

His silence at the time led him to a decade-and-a-half association with the group, in and out of jihadism until his arrest in May 2002. 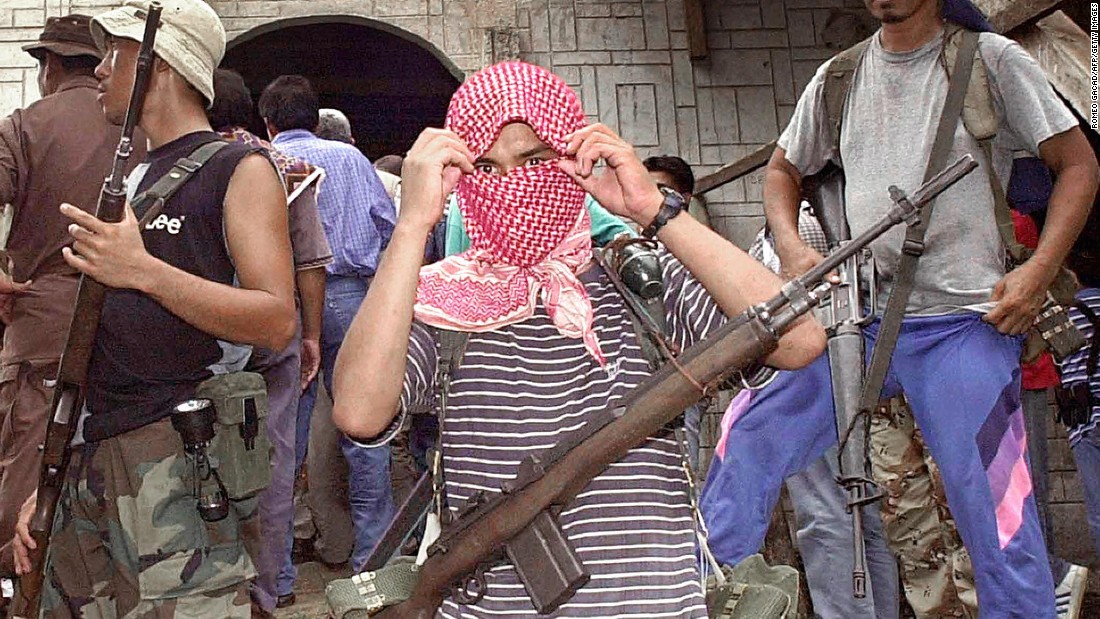 "ASG rebels holding Western hostages taking position outside a mosque in their stronghold in Jolo island in the southern Philippines."

Life of a jihadi

While a member of ASG Abu Jihad performed many roles, participating in, and coordinating, training camps. He says that Khalid Sheikh Mohammed, Al Qaeda member and 9/11 mastermind, now held at Guantanamo, was one of his instructors.

He's fought side by side with Hapilon in all-out battles with the Armed Forces of the Philippines, notably during a two-week siege of an ASG camp in 2000.

During his time in the group he says he also acted as a courier for overseas funding, often traversing the largely lawless and porous maritime borders between Indonesia, Malaysia and the Philippines to bring in money -- "millions" of dollars -- as well as guns, and fighters.

Long a hideout for drug smugglers, pirates, and kidnap-for-cash groups, traveling through these so-called "back channels" was "very easy," says Abu Jihad. "The people can just come in using the fast speed boats ... (to) easily transport firearms and money."

Foreign funding, especially in the early days of the group's existence, was crucial to ensuring its survival.

But taking money from Malaysia, Indonesia and from further afield, including Saudi Arabia, meant living up to the expectations of ASG's benefactors, Abu Jihad says.

"It was always the advice of foreign supporters like (Saudi financier and Osama bin Laden's brother-in-law) Mohammed Jamal Khalifa, to do something which could gain international mileage for the organization," he says.

"If you want people in the Middle East, the Arab brothers to hear your voice and know what you are doing, then you have to do something bigger -- not only for local consumption and local media.

While Abu Jihad says he secretly felt revulsion at the group's direction, he continued to go along with the atrocities, fearful that if he spoke out he would be killed.

He claims to have participated in numerous kidnappings -- one of the hallmarks of Abu Sayyaf's operations.

"ASG have kidnapped different kinds of people. From poor people to wealthy foreign nationals. When I say poor people, even to the extent that they ask for 100,000 pesos (about $2,000)."

He says that while the militants are often merciful to their captives, even feeding them from the communal cooking pot, "sometimes they are harsh." 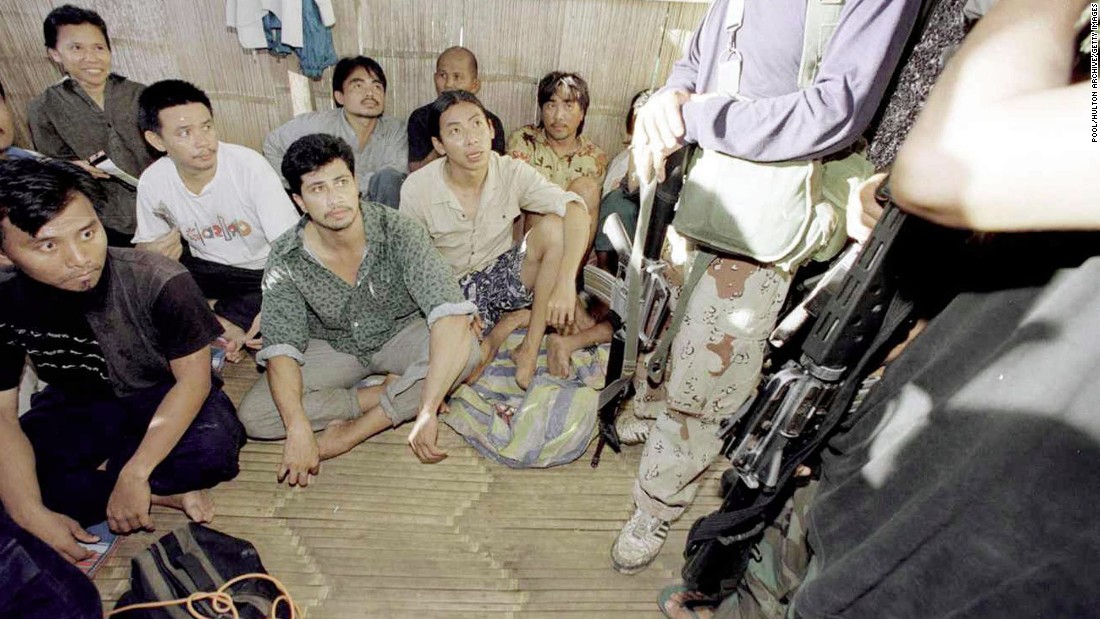 "Malaysian hostages are guarded by two ASG militants in 2000."
And the group wasn't squeamish about carrying out its threats.
In 2000, he said he was part of a spate of kidnappings that at one point saw over 50 hostages held by ASG -- two of whom, it was decided, would be beheaded as part of a grisly "birthday celebration" for then-President Joseph Estrada.

He says he managed to save the life of one of the men earmarked for death, telling his jihadist comrades the man they wanted to kill wasn't a military officer as suspected, but a former classmate who had become a teacher. Thanks to his entreaties, the hostage was spared, he says.

"But he was replaced and substituted by another one."

He fled in the early 1990s, eventually becoming a public school teacher but threats from the group compelled him to rejoin the ranks some years later.

In 2002 he was arrested on terror charges and stayed in jail until he was released in 2007. He now works with a terror analyst who discovered his anti-jihadist writings penned while he was imprisoned. The analyst set up the meeting with CNN.

Abu Jihad continues to write, in the hope that his words will steer others from the path he once chose.

"I'm writing for the benefit of younger generations so they wouldn't be convinced like I was convinced." 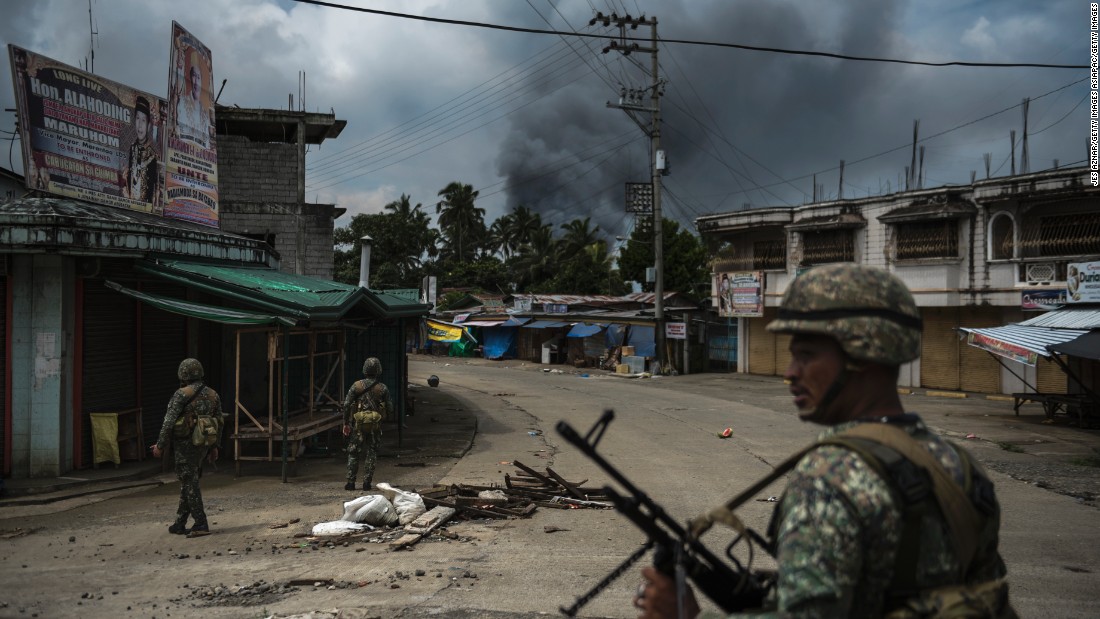 "Soldiers patrol a street as smoke billows from a fire caused by heavy gunfights and aerial strikes on June 6, 2017 in Marawi."

Had he not renounced his jihadi life, Abu Jihad may well have been in Marawi today.

After over a month, and several missed deadlines for the AFP to clear the city of militants, a hard core of several dozen of his former comrades stubbornly remain.

Whatever the outcome, Abu Jihad knows the experience will only have emboldened the group, and its driven, fearless leader.

"The next time they will do this they are bolder," he says. "And they are better equipped. And I am afraid for that."