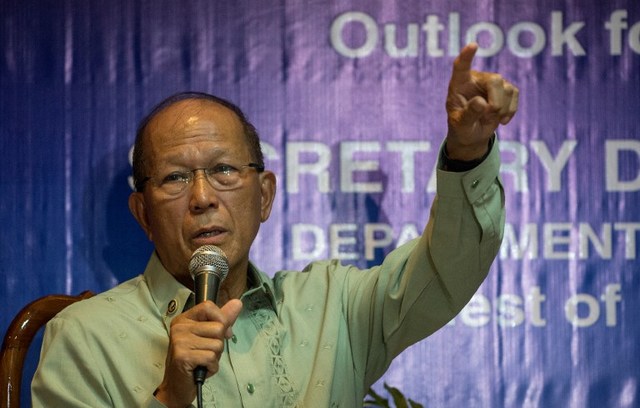 ANTI-PIRACY PATROLS. Department of National Defense (DND) Secretary Delfin Lorenzana gestures during a press conference at the Armed Forces of the Philippines (AFP) headquarters in Manila on March 9, 2017. Photo by Noel Celis/ AFP

The Abu Sayyaf, a kidnap-for-ransom network that has pledged allegiance to the Islamic State (ISIS) group, has been kidnapping sailors on fishing vessels and cargo barges, including an elderly German whom it beheaded last month after ransom demands were not met.

Defense Secretary Delfin Lorenzana said he and his counterparts from Malaysia and Indonesia had agreed to patrol a sea lane where commercial vessels could pass with protection from the three nations' navies.

"We are inaugurating some time in April or May a joint patrol of the three nations in that area," Lorenzana said in a news conference.

"(Vessels) cannot stray beyond that lane so that we can help protect them."

The waters between the three nations have become increasingly dangerous in recent years, with maritime officials warning of a "Somalia-type" situation if the attacks are not addressed.

In February, the Abu Sayyaf murdered Jurgen Kantner, 70, five months after his yacht was found drifting off the southern Philippines with the body of his female companion, Sabine Merz, who had been shot.

The Abu Sayyaf are holding 31 foreign and local hostages including 6 Vietnamese seamen attacked on their cargo ship off the southern Philippines last month, according to Lorenzana.

Lorenzana said he told the Vietnamese envoy to Manila last week to arm his nation's crewmen passing through the waters or coordinate with Philippine authorities to avoid being kidnapped.

He added President Rodrigo Duterte was "very interested" in ending the kidnapping problem.

Duterte had asked China to help patrol the waters, citing Beijing's dispatch of a naval convoy to the Gulf of Aden in 2009 to protect Chinese ships from Somali pirates.

Lorenzana said equipment to help fight the Abu Sayyaf like fast boats, drones and radars would be acquired as part of a military modernisation programme.

The Abu Sayyaf, established with seed money from Osama bin Laden's Al Qaeda network, have been kidnapping foreigners and locals for decades and holding them for ransom on its remote island strongholds in the southern Philippines.

Lorenzana, who identified the Abu Sayyaf and other extremist groups as the Philippines' top security threat, said the kidnappings were "embarrassing to the whole world."