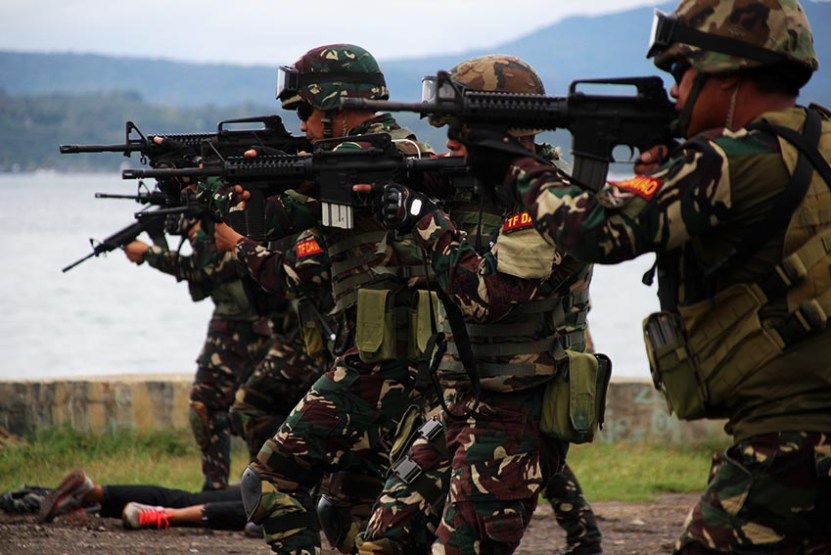 COMBAT READY. As part of their Araw ng Dabaw preparations, soldiers of the Task Force Davao display their readiness to respond to emergency scenarios during the combat simulation conducted by the Joint Task Force Haribon at the Task Force Davao headquarters in Sta. Ana Wharf, Davao City on Wednesday, Feb. 8. (Paulo C. Rizal/davaotoday.com)

A ranking army official here said the military operations against the Abu Sayyaf Group was gaining success following a series of reported encounters and killings of ASG rebels.

“The AFP’s campaign against the Abu Sayyaf Group and other terror groups there in the [Western Mindanao Command], particularly in Sulu and Basilan are gaining success. The encounters and and the neutralization of terrorists in those areas) are continuous,” Brig. Gen. Gilbery Gapay, commander of the Joint Task Force Haribon said in a press conference here Wednesday.

The Armed Forces of the Philippines is currently waging an all out war against the ASG. The AFP recently deployed 8,000 soldiers as augmentation force to Sulu and Basilan, both known to be a bailiwick of the ASG operations.

“What usually happens is that they make some diversionary tactics in other areas to ease up the Armed Forces’ pressure on them,” Gapay said.

He, however, assured the public that they are constantly monitoring for possible threats. Gapay said they already neutralized the leadership of local terror group Ansar al-Khilafah in the Philippines in Saranggani which is within the area of responsibility of the Eastern Mindanao Command.

As for the ASG, the Maute Group, and the Bangsamoro Islamic Freedom Forces, Gapay said they “extensive intelligence coverage.”

“Our intelligence coverage of these groups are extensive. [We monitor] their movements, their splinter groups so that we would know firsthand of any attempts to infiltrate Davao City), Gapay said.

http://davaotoday.com/main/politics/army-military-ops-vs-asg-gaining-success/
Posted by Retired Analyst at 10:22 AM