From the often pro-Communist Party of the Philippines (CPP) Davao Today (May 1): NDF declares suspension of offensives to free its prisoners in Mis Or 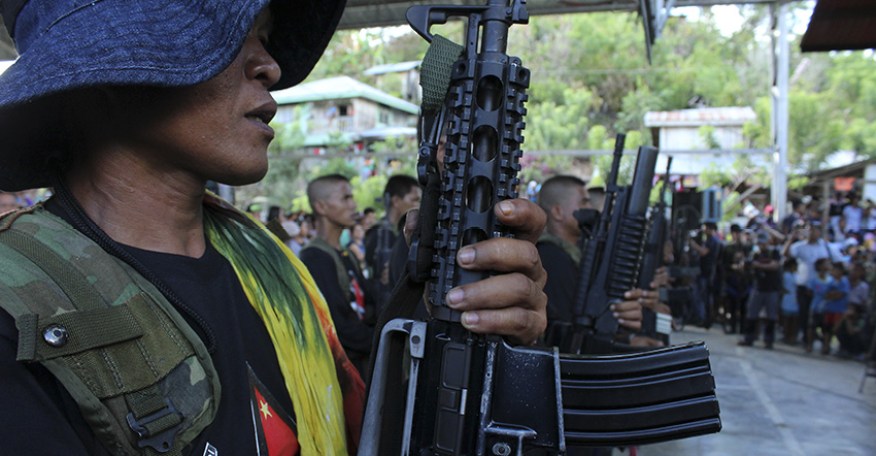 OPENING CEREMONY. Before the program proper for the release of the POWs, the NPAs line up for the singing of the Internationale. (Earl O. Condeza/davaotoday.com file photo)
The National Democratic Front on Saturday, April 30, declared a five-day suspension of all military offensives in the seven towns in Misamis Oriental from midnight of April 30 to midnight of May 5 to pave way for the release of three police officers it captured on April 3.
Cesar Renerio, spokesperson of the NDF-North Central Mindanao, said it ordered the suspension of offensive operations by the New People’s Army units in Balingasag, Lagonglong, Salay, Sugbungcogon, Kinoguitan, Balingoan and  Medina towns in Misamis Oriental; and in Cabanglasan, Impasug-ong, and Malaybalay City in Bukidnon Province.

On April 3, the NPAs put up checkpoints and captured three police officers and two soldiers.

Renerio said through the efforts of the local third party facilitators and the local crisis committee of Misamis Oriental and Bukidnon, the NDFP received the copy of the letter signed by the 403rd Brigade – Philippine Army commander Col. Jesse Alvarez to Misamis Oriental province Governor Yevgeny Vicente Emano and Bukidnon province Gov. Jose Maria Zubiri for the five-day “Stand Down Order”.

“Based on Col. Jesse Alvarez’ definition of the “stand down” the armed encounters will temporarily be stopped and the stand down order will be ordered to his troops who will remain in their positions,” said Renerio.

Renerio added that the Army still has an option to engage offensive actions against armed groups who will be entering within 2-kilometers from their base, camps, and locations.

Renerio said their order for ceasefire “means that the NPAs will suspend all military actions against a unit or any member of the Army, police and the militia in those areas for five days.”

However, Renerio clarified that NPA fighters should remain in “active posture for defense”.

The NPA units should always be on alert and should not hesitate to defend their own forces whenever the AFP, police, or paramilitary launch a secret attack or if there is any effort to launch violence against the people),” said Renerio.