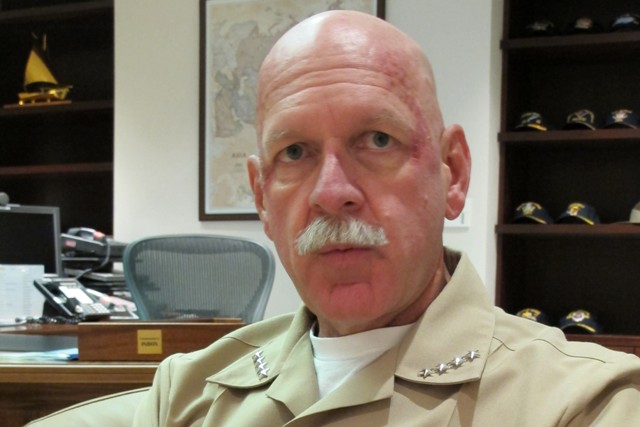 U.S. Pacific Fleet Commander Adm. Scott Swift speaks during an interview in Pearl Harbor, Hawaii, Thursday, Oct. 22, 2015. Swift says it’s up to policymakers in Washington whether his sailors patrol within 12 nautical miles of newly constructed islands claimed by China in the South China Sea, but they are ready to do so if asked. AP/Audrey McAvoy

The U.S. Navy's top commander in the Pacific says it's up to policymakers in Washington whether his sailors patrol within 12 nautical miles of newly constructed islands claimed by China in the South China Sea.

Pacific Fleet Commander Adm. Scott Swift spoke during an interview Thursday amid tensions over Beijing's territorial claims in the South China Sea and reports the U.S. will sail near the disputed islands to challenge those claims.

Swift told The Associated Press his sailors have the capacity and capability to enter the waters, but he emphasized that the patrols would reinforce international laws and wouldn't be directed at a specific country.

"We're ready," Swift said at his Pearl Harbor office. "We have the resources to support whatever those policy decisions are and whatever policymakers may ask us to do to demonstrate the U.S. resolve with respect to the operations that we conduct in the South China Sea."

China and five other governments lay claim to part or all of the South China Sea, a busy passageway for commercial and military vessels. Washington has a policy of not taking sides in the territorial disputes, but says it's in its national interest to ensure freedom of navigation and overflight and the peaceful resolution of the conflicts.

Since 2013, China has accelerated the construction of new islands atop reefs and atolls in the South China Sea and is adding buildings and airstrips in apparent attempts to boost its sovereignty claims to the territory.

Swift said under international law, building on an island that's only exposed at low tide but not at higher tide doesn't bolster a territorial claim to the place.

He reiterated the U.S. doesn't support land reclamation efforts, regardless of their scale.

Defense Secretary Ash Carter said during a news conference in Boston last week the U.S. will fly, sail and operate wherever international law permits, including in the South China Sea.

The U.S. newspaper Navy Times reported earlier this month the Navy may soon receive approval for a mission to sail close to a Chinese-built island in the Spratly Islands.

Swift said China's construction of the islands hasn't changed the way the Pacific Fleet operates in the area and won't change the way it does going forward.

"We continue to operate in that space, just as if they hadn't been built," he said.

The U.S. last patrolled within 12 nautical miles of the disputed islands in 2012, according to testimony Assistant Defense Secretary David Shear gave to the Senate Armed Services Committee last month.