Video: SAVE OUR SCHOOLS: The Plight in Achieving Children’s Right to Education

20 minute propaganda video from the pro-CPP Save Our Schools (Mar 26): SAVE OUR SCHOOLS: The Plight in Achieving Children’s Right to Education 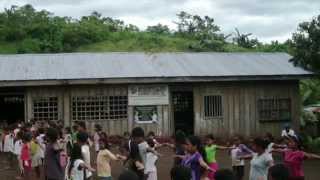 Published on Mar 26, 2015
Res Ipsa Loquitor. This video shows you of an undeniable truth that has been happening in the hinterlands. Schools being used by the military as their barracks and war field despite clear constitutional provisions that prohibits encampment in schools and other public infrastructure. Over a year until present, the Save Our Schools Network (SOS Network) has documented 38 schools in Southern Mindanao alone under military encampment by various units of Armed Forces of the Philippines. On October last year, some schools in Talaingod, Davao Del Norte were strafed by the military. Cases of harassments, threats and red-baiting were also recorded against elements of the AFP. The fact shown in this video speaks for itself.