China urges trade with PH across 'sea of peace'

From Rappler (Jul 4): China urges trade with PH across 'sea of peace'

'The problem lies with President Aquino,' says a Chinese official whose grandfather was buried in the Philippines 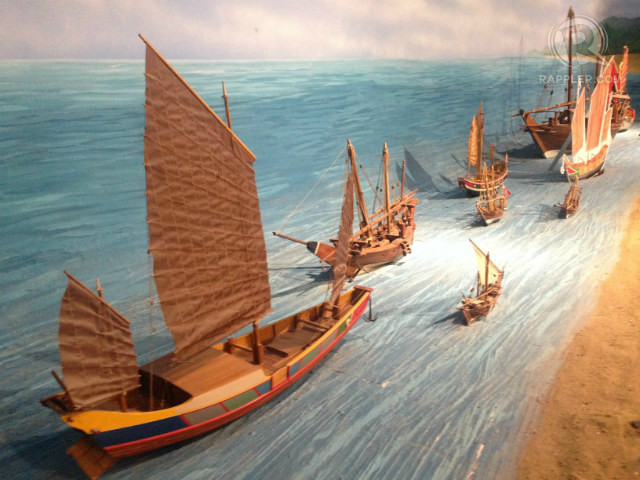 
FUJIAN, China – More than a century ago, the ancestors of Zheng Zhi Qiang braved the South China Sea to reach the Philippines, the land of promise for thousands of Chinese.
Zheng's grandfather, for one, ran a business in Luzon, the Philippine island group that includes the capital Manila. Who knows, Zheng said, if his grandfather got married and even sired children in the Philippines? After all, the old man would visit his wife in China for only one or two months, and spend the rest of each year in the Southeast Asian country.
Eventually his grandfather was buried in the Philippines – home to more than a million Filipinos of Chinese ancestry mostly from China's Fujian province.
Zheng, an official of Fujian province, recounted this to illustrate the "long history of friendly exchanges" between China and the Philippines. It's a bond forged by his ancestors through the South China Sea, a "sea of peace" that is now a flashpoint of conflict between the two countries.
He said the two countries should keep a close relationship. Echoing the Chinese government, he then urged better trade between China and the Philippines across the disputed South China Sea, as Beijing revives an ancient trade route in the Asia Pacific.
Zheng – the deputy director of the foreign affairs and overseas Chinese affairs office in Quanzhou, a ciy in Fujian province – joined a dinner with Filipino and Thai journalists on Wednesday, July 1, as part of a program by the Chinese foreign ministry.
There he answered, among other things, questions about the Philippines and the 21st Century Maritime Silk Road, China's project to boost maritime trade in the region. (READ: PH and China's 21st Century Maritime Silk Road)
Is the South China Sea dispute, for instance, affecting the Philippines' role in the Maritime Silk Road?
"China is open to the international community," Zheng told reporters through a translator. "So the problem lies with President Aquino."
Zheng was referring to Aquino's unflinching position on the sea dispute. Unlike his predecessor Gloria Macapagal Arroyo, whom a think tank viewed as "more receptive to Beijing's commercial incentives," Aquino angered the Chinese by approving a historic case against China over the South China Sea.
In Beijing, a Chinese editor told us it doesn't help that Aquino's family comes from China's Fujian province. (READ: Aquino's Chinese ancestry fuels anger in Beijing)
Zheng said: "With the future development of the 21st Century Maritime Silk Road, I think that there will be more opportunities for both sides to have future developments. It's a kind of a win-win situation."
'Embarrassed' Chinese Filipinos
He also said he has met with many Chinese Filipinos, "and all of them expect that the South China Sea issue will be settled very soon so that both countries will be benefited."
Zheng pointed out that Chinese Filipinos "stand in between" their ancestors' homeland, China, and their country, the Philippines. "They're kind of in the middle, very embarrassed." (READ: Philippines and China: Beyond the sea dispute) 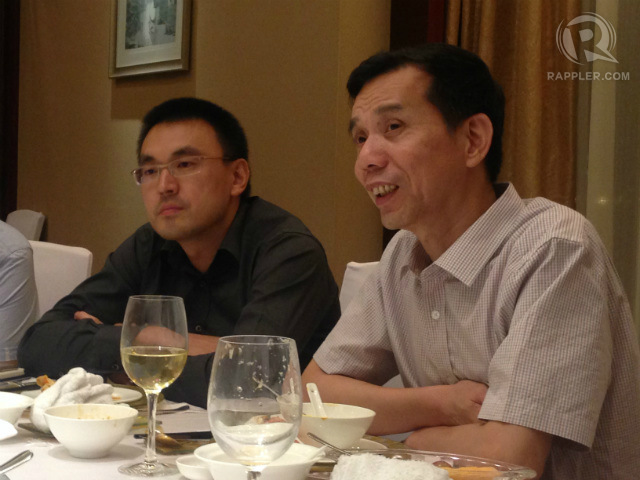 LINKS WITH PHILIPPINES. Zheng Zhi Qiang, an official in China's Fujian province, says his grandfather ran a business in the Philippines. Photo by Paterno Esmaquel II/Rappler
"Originally, the South China Sea was a sea of peace, of peaceful coexistence. So it is very surprising for them to see that kind of unpleasant situation," he said.
Dr Chu Yanli, senior counsellor of Fujian's foreign affairs office, agreed that the Philippines can join the 21st Century Maritime Silk Road.
Referring to Filipinos, Chu said participating in the maritime project "depends on your government."
"If you actively want to join it and put more passion and attach more importance to it, I think that depends on your government, because China is open to all the countries who are ready, who prefer to join the initiative," Chu said.
Asked about potential benefits if the Philippines joins the Maritime Silk Road, Chu cited possible gains in infrastructure and expertise, among other things. "Mutual learning and mutual benefit – that's definitely bilateral, not for one side. And also, how much benefits you can get, I think, is based on and according to the extent to which you are involved."
The Philippines, however, has been cautious about a proposed project with China along the Maritime Silk Road: jointly exploring resources with China in the South China Sea. This is because the project could mean the Philippines dropping its claim over the disputed waters. (READ: Aquino: Venture with Beijing harder to keep than marriage)
The Chinese Embassy in the Philippines, for its part, earlier assured the Philippines that "is definitely part of the 21st century Maritime Silk Road."
"China welcomes the Philippines to be a proactive and constructive partner of the 21st century Maritime Silk Road, which serves the national interests of the Philippines and will contribute to the social and economic development of the Philippines," according to an embassy statement quoted by the media in November 2014.
Largest source of imports
China remains one of the Philippines' biggest trading partners.
China, in fact, was the Philippines' largest source of imports as of March.
The trade volume between the Philippines and Fujian province alone, according to Chu, is $4.96 billion.
Chu added that imports and exports between the Philippines and Fujian rose by 12.9% from January to May this year.
She said the Fujian provincial government has also approved investments in the Philippines worth $15.2 million. This is for 18 Fujianese companies "in mineral exploitation, food processing, communications, and also construction."
In the Fujianese city of Xiamen, Chen Jianjin, vice senior officer of the Xiamen Commerce Bureau, told Filipino reporters in April that China is planning 9 projects "directly connected to the Philippines."
Chinese Ambassador to the Philippines Zhao Jianhua pointed out that over the past 40 years, trade between the two countries has enjoyed a "560 times growth."
Philippine statistics also show that 1.5% of the Philippine population comes from the ethnic Chinese community. Many others as well have Chinese ancestry. The richest man in the Philippines, Henry Sy, and other top Filipino businessmen also come from Chinese families.
Zhao said, "We are destined to be friends and partners."
Still, China's critics in the Philippines have called for a boycott of Chinese products because of the dispute over the South China Sea. Saying its ties with China go beyond the maritime row, the Philippine government has disowned this initiative.
http://www.rappler.com/nation/98345-china-philippines-maritime-silk-road-sea-dispute
Posted by Retired Analyst at 1:55 AM