Not a good time to review VFA, says US envoy

From Rappler (Oct 24): Not a good time to review VFA, says US envoy

(UPDATED) Ambassador Philip Goldberg says the United States is 'always open to talking about these issues, but this shouldn’t be done in the middle of' the debate over the custody of a US Marine suspected of killing a Filipino 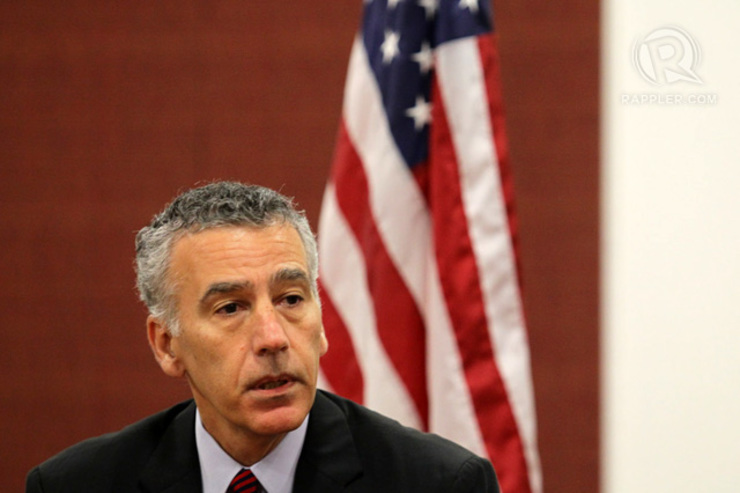 FOLLOW VFA: Ambassador Philip Goldberg says the current case of the US Marine should be separated from moves to review VFA. Photo by Mark Cristino/Rappler
The is open to reviewing the provisions in the Visiting Forces Agreement (VFA) with the , but it should not be done while the two countries are handling the murder probe against Private First Class Joseph Scott Pemberton, US Ambassador Philip Goldberg said.
"We need to follow the VFA at the moment. While we’re always open to talking to our friends and allies about these issues, this shouldn’t be done in the middle of something that we have to handle through rule of law," Goldberg said on Friday morning, October 24, in a roundtable discussion with select journalists, including Rappler's.
"We can continue talking about it. But it’s not part of this process. It’s part of the process between the countries to clarify what these things mean. If the Philipines wants to bring additional things to the table as the Secretary of justice suggested that’s the ' right,” said Goldberg.
Justice Secretary Leila De Lima also said on Thursday the executive branch is reviewing the "not so clear" provisions in the VFA. Goldberg was asked if the sees "a need to change anything in the VFA" and if it will allow a "review of ambigious provions" in the agreement.
'Enough clarity'
What the and the Philipines are doing right now is "clarify the different parts of the VFA" with the Department of Foreign Affairs and the Department of National Defense. But Goldberg stressed that this process is "separate from the current situation," where the custody of Pemberton is being debated.
Highlighting the rule of law, Goldberg said the "VFA as it is" is clear on the issue of custody.
"I think we should separate that from the current situation. The current situation is that we have to apply VFA as it is. We have enough clarity in the steps under way for example. The Philippine government has said, as we have, that custody goes to the and that jurisdiction will be applied here. These are steps in the VFA that have to be formally done," Golberg said.
Ratified by the Senate in 1998, the VFA allowed the return of American troops to the following the eviction of US bases here in 1992. The VFA provides that Philippine courts will have jurisdiction over erring troops but custody will remain with the while trial is ongoing.
Goldberg noted that the transfer of Pemberton to Camp Aguinaldo is already an "unusual step" for the in consideration of people's sentiments. This is very different from the case of former US Marine Lance Corporal Daniel Smith in 2005 when he was detained inside the embassy while the trial for rape was ongoing. (READ: EDCA Olongapo murder, and the old case of Daniel Smith)
'Extraordinary cases'?
De Lima said the is not seeking to amend the treaty, but only to clarify the guidelines in implementing the military agreement with the .
De Lima was quoted saying, “There are provisions where the Philippine and US sides have differing interpretations, that’s why we have to have implementing guidelines."
A provision in the VFA also allows the to request custody in "extraordinary cases." Based on the interpretation of the , Goldberg said, this still means the has to agree to any request from the Philippine side.
Earlier, De Lima said that the transfer of Pemberton to was already an indication that the already has custody over the soldier. Her position contradicted the statements of Foreign Secretary Albert Del Rosario and the US embassy that, under the Visiting Forces Agreement (VFA), his legal custody remains with the US despite his being detained in Philippine military grounds.
De Lima later announced the review of the implementation of the VFA.
Goldberg highlighted that clarifications has to be "mutually agreed."
"We've been engaged in talks over time with the Department of Foreign Affairs (DFA) with the Department of National Defense (DND) about clarifying various aspects of VFA to the parties' satisfaction. Any additional suggestions are up to the ' side if they want to make additional suggestions. But they have to be mutually agreed. It’s a mutual agreement between two countries. It has to suit both are interests and objectives," said Goldberg.
"The is free to raise any issues that they want but that doesn’t mean on the other side that it is immediately agreed to. There are two sides to an agreement," Goldberg added.
Senator Miriam Santiago in a Senate hearing on Wednesday, October 22, also called the VFA a "failure." She hit the provision in the agreement that grants the jurisdiction over US servicemen accused of crimes, but gives the custody over them. (READ: 'VFA is a failure' – Miriam)
Goldberg echoed President Benigno Aquino III in dismissing calls to abrogate the VFA. "I can’t imagine abrogating VFA, but I don’t want to get into a political debate here," Goldberg said.
http://www.rappler.com/nation/72983-ambassador-goldberg-vfa-review
Posted by Retired Analyst at 5:20 AM