The order to Filipino peacekeepers was 'to leave the weapons quiet so as to give some space but never to hand over weapons,' says Hervé Ladsous, UN Under Secretary-General for Peacekeeping Operations 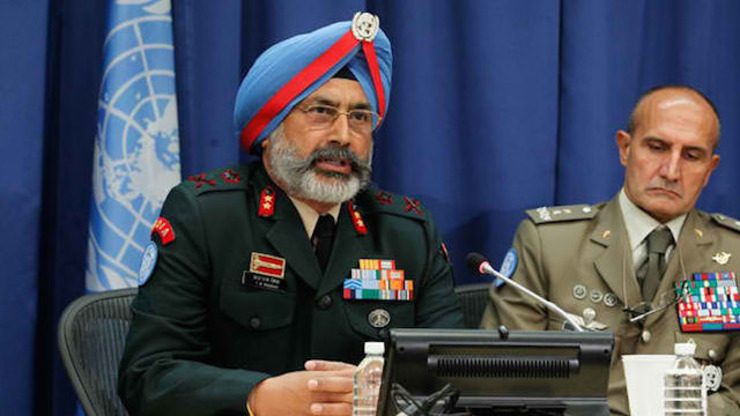 The United Nations (UN) backed Lieutenant General Iqbal Singha amid complaints from the Philippine military that the commander of the UN Disengagement Observer Force (UNDOF) put the Filipino troops in danger when he ordered them to surrender their weapons to Syrian rebels last week.


"It's a matter of judgment. Singha exercised good, sound judgment all throughout the process," said Hervé Ladsous, UN Under Secretary-General for Peacekeeping Operations, who held a press conference in on Wednesday, September 3, following his briefing to the UN Security Council.


This resulted in a standoff that escalated to a 7-hour firefight in one of the encampments. Forty Filipinos in Position 68 maintained they only fired in self defense.


Running out of ammunition, the soldiers hatched and later executed an escape mission midnight Sunday, September 1, that was backed by their Filipino commander in the Golan Heights and the military high command in the . They walked 2 kilometers to the Philippine Battalion headquarters while the rebels were sleeping.


The 32 troops in the other encampment – Position 69 – were earlier rescued by the UNDOF's quick reaction force sent by Singha.


Explained Ladsous: "You would realize though the situation on the ground is fast moving. There was time for fast action – to extract people. There are times when other considerations like safety of people come in. You have to possibly refrain from proactive stance like shooting back because it might put others in danger."


He added: "Clearly, it's a very challenging situation. Our peacekeepers showed considerable steadfastness, courage at all levels at the level of force commander General Singha who displayed strong professionalism, leadership, made decisions that I think helped. He is certainly to be commended. I place on the record my full trust in the way he performed his duty."


The Philippine military disagrees. Catapang said he wants the UN to investigate Singha.


At the command center in where they coordinated with the troops in Golan over the weekend, defense and military officials were baffled by Singha's order for the soldiers to surrender their weapons to the rebels.


"We will be massacred," Defense Secretary Voltaire Gazmin was quoted as saying. The troops monitored the rebels regrouping after the 7-hour firefight. The Filipino soldiers said they got new orders from Singha to again surrender their weapons and raise the White Flag if the rebels fire on them again.


Catapang said they considered Singha's order as an attempt to make the Filipino troops "sacrificial pawns" to save the 45 Fijian peacekeepers that the rebels had taken hostage. The Fijians, who were taken just before the attack on positions 68 and 69, were used as translators when the rebels made their demands to the Filipinos.


Catapang said there was no guarantee that the rebels would not take them hostage too. He questioned Singha's decision not to send troops to rescue those in Position 68 like he did in Position 69.


The rebels included members of the Al-Qaeda affiliate in , the Al-Nusra Front. They are still holding the Fijians and have issued 3 demands: the Al-Nusra Front's deletion from the UN terrorist list, compensation for 3 colleagues killed in firefights with the peacekeepers, and humanitarian assistance for a town they control.


The ramifications of the Filipino peacekeepers' defiance of the UNDOF commander remain unclear. Filipino UNDOF chief of staff Colonel Ezra Enriquez, also the Philippine Battalion Commander, quit his post but it was not accepted.


"That is a matter for them. What counts is the Filipino peacekeepers detained in 2 locations were in a position to come to safety," said Ladsous.


The has instead offered a battalion of troops as a standby force to the UN.


UNDOF has been in Golan Heights since 1974 to monitor the ceasefire agreement between and . The peacekeepers in recent years have been targeted by Syrian rebels as the conflict turned for the worse.


The has been a troop-contributor since 2009. Filipino peacekeepers were kidnapped by Syrian rebels in 2 incidents last year but it was when they were out on patrol and were unarmed. They were eventually released.


Last week's incident marked the first time the rebels attacked them in their encampment.


The UN said it is now changing its rules of operation to keep peacekeepers safe and beef up their equipment.

http://www.rappler.com/nation/68120-united-nations-backs-undof-commander
Posted by Retired Analyst at 6:06 AM