Tribesmen celebrate pull out of troops from Davao town

From the Mindanao Examiner BlogSpot site (May 1): Tribesmen celebrate pull out of troops from Davao town 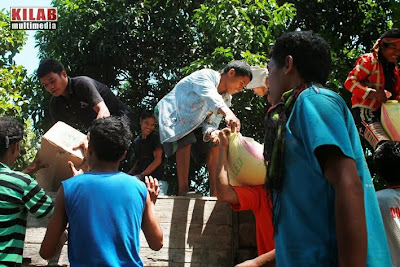 Philippine tribesmen on Wednesday celebrated the pull out of government troops in Davao del Norte’s Talaingod town and praised all those who supported their plight at the height of military offensive against communist rebels in the area.

More than 1,000 tribesmen have fled the town and sought safe refuge with the United Church of Christ in the Philippines in Davao City. Many indigenous villagers have accused the soldiers of harassing them and some even tagged them as members of the rebel group New People’s Army.

They said soldiers put up encampments in civilian communities and public infrastructures, including schools and government buildings. The pull out of troops from at least 11 areas in the town was an offshoot of negotiations initiated by Davao City Mayor Rodrigo Duterte and Davao del Norte Governor Rodolfo del Rosario.

Del Rosario has recently sent a truckload of rice and canned goods for the refugees in Davao City in an effort to convince them to return to the town.

The indigenous group Salugpongan ‘Ta Tanu Ig Kanugon and PASAKA which assisted the refugees thanked all those who supported and sympathized with them in their plight. The indigenous groups celebrated what they considered as “gains” that they have won after almost a month at the evacuation camp provided by the UCCP.

Del Rosario also said that the refugees would be given relief goods and medicines before they return to their respective villages in Talaingod.

Datu Doloman Dawsay of Salugpongan ‘Ta Tanu Ig Kanugon said they will all remain vigilant despite the pull out of troops.

“We gained this victory because we are united. The abuses of the military would not have been exposed if we did not fight. We became victorious because we are militant. The military and their cohorts are really determined to discredit and divide us, but we remain strong. They fabricated a lot of lies just to hide their abuses.”

“They accused us of being NPA to cover-up their crimes against our people. The truth will not come out if we had allowed ourselves to be captive by the military,” he said in a statement sent to the regional newspaper Mindanao Examiner.

The group Exodus for Justice and Peace (EJP) also vowed to continue monitoring the areas and the evacuees when they return home. The group warned the military not to retaliate against the leaders and communities that protested their abuses citing various cases in Agusan and Compostela Valley provinces where troops allegedly harassed indigenous leaders who exposed military abuses.

“We are happy that the lumads can now go back to their community,” said EJP’s Pastor Jurie Jaime.

The support group of the Manobos, Defend Talaingod Save Pantaron Range, also said: “The pull out of the military forces in the area is just an initial victory just so the refugees can go back to their homes. But this is just the beginning; the soldiers involved in abusing these people should still be held accountable.” 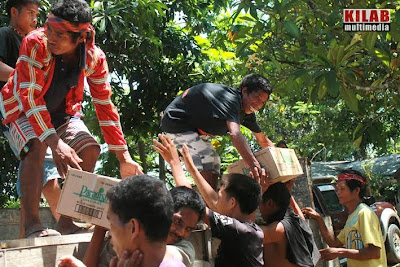 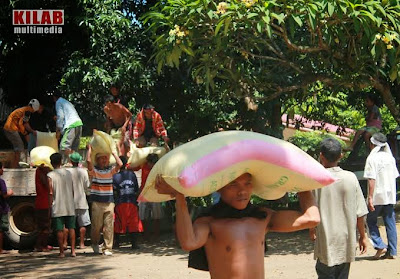 Refugees get their supply of rice and canned goods sent by the Davao del Norte provincial government to an evacuation camp put up by the United Church of Christ of the Philippines in Davao City where tribesmen who fled military operations in Talaingod town. (Photos by Kilab Multimedia)

http://www.mindanaoexaminer.net/2014/05/tribesmen-celebrate-pull-out-of-troops.html
Posted by Retired Analyst at 5:14 AM