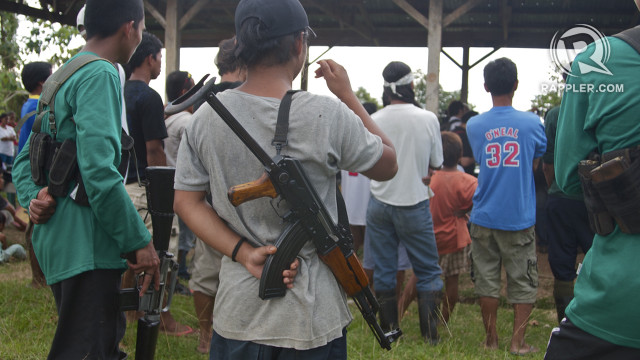 The captured candidates were armed militias and are members of the Citizen Armed Force Geographical Unit, Francisco said.

“Captured and considered as prisoners of war were barangay captain Lito Andalique, barangay kagawad Marvin Bantuasan, Crisanto Piodos, and Balaba Andalique, and Cafgu tribal member Pepe Subla. The 5 are currently accorded rights as prisoners of war (POWs), their health and safety at the auspices of the NPA's custodial force,” Francisco said.

Simultaneously, the communist guerrillas raided a detachment of the 26th Infantry Battalion in the same village, the NPA claimed.

Agusan del Sur is identified as one of the strongholds of the NPA in the country.

Francisco said they also engaged the reinforcements sent by the Armed Forces of the Philippines (AFP), killing at least 5 government soldiers.

“Red fighters also thwarted a platoon of reinforcement forces of the 26th IB in a gunfight that yielded at least 5 fatalities on the military side. AFP's Eastmincom responded by sending two military helicopters that dropped 14 bombs in the community; the helicopters later secured their fatalities,” Francisco said.

Capt Alberto Caber, chief of the public information office of the military’s Eastern Mindanao Command, asserted that 6 were captured and that no soldier was killed in the incident.

“Only one soldier was grazed in the head. They should explain what they did with one of the captives. They are responsible to the 6 persons they kidnapped,” Caber said.
The military officer also said that members of CAFGU are not regular soldiers.

“Why did the NPA do that? Duties of the CAFGU are only for 15 days and they only receive honorarium and not salary,” Caber said.

Government militias automatically resign from their duties once they run for public office, Caber said.

The military said the incident proves the alleged intention of the NPA to interfere with the elections through harassment.

“The NPA is trying to let the people see that they are capable of sowing fear. That they can do anything anywhere here in Eastern Mindanao,” Caber said.

The NPA, he added, is also harassing the candidates for extortion purposes.

“We consider this as an election-related violence. And the Eastern Mindanao Command condemns these atrocities by the rebels,” said Caber.

However, the NPA denied the accusations, saying that the “POWs” are legitimate targets for participating in “anti-people” activities.

“The five POWs are not ordinary civilians and reelectionist village officials, but are counter-revolutionary paramilitary forces, and are, thus, legitimate targets of the NPA. The POWs are psychological warfare agents, who banned the masses from going to their farms and forcing them to remain at the village centers, in a blatant attempt to control their movement,” Francisco said.

“These POWs have campaigned hard against the NPAs, harassed peasant leaders, and strongly endorsed the entry of palm oil and mining projects — projects that will eventually dislocate the masses and deprive Lumads of their ancestral domain,” the communist spokesman added.

Francisco said the raid was a “campaign against a fascist Army unit and its paramilitary machinery” who are allegedly responsible for “butchering two peasant leaders — Gabriel Alindao and Benjie Planos of the peasant group Kahugpungan Alang sa Kalambuan sa Kauswagan or Kasaka — detaining and torturing two civilian Lumad minors, and conducting massive harassment and counter-revolutionary drive against the peasant masses in Loreto, Agusan del Sur.”

Francisco said that as the government continues to intensify its counterinsurgency operations, the revolutionary movement will also step up its attacks and expand its “barrio councils” while establishing “welfare projects to sustain the basic needs of the masses.”

Three tribal leaders were sent by the local government of Loreto to negotiate for the release of the captives.

Caber said the rescue and pursuit operations would temporarily slow down to give way to the talks.

http://www.rappler.com/nation/42256-npa-seize-prisoners-war?utm_source=feedburner&utm_medium=feed&utm_campaign=Feed%3A+rappler%2Fnation+(Rappler%3A+Nation)
Posted by Retired Analyst at 5:26 AM