From the Mindanao Examiner (Jul 7): Fighting in Southern Philippines triggers exodus of civilians 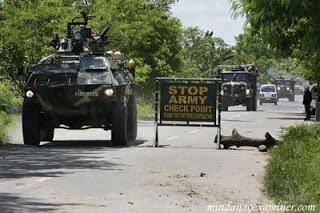 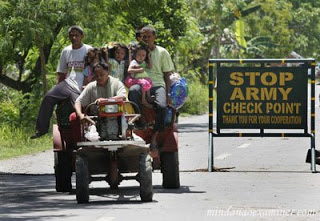 Thousands of people have fled fierce fighting between military and rebel forces in the southern Philippines, officials said.

Clashes were reported in the provinces of Maguindanao and North Cotabato where army soldiers and members of the Bangsamoro Islamic Freedom Fighters have been fighting.

Rebel sources said at least a dozen soldiers had been killed in the fighting this week and that several BIFF members were also reported slain and wounded.

The Mindanao Human Rights Action Center also reported that at least 7 people, including a four-year child, were wounded from the shelling in the village of Ganta in Datu Piang town in Maguindanao.

There was no immediate statement from the provincial and regional governments about how it would resolve the crisis. Many of those who fled their homes are in temporary shelters and have no access to medical facilities or food.

Most of the members of the BIFF were former fighters of the larger Moro Islamic Liberation Front which is currently negotiating peace with Manila.

But the slow progress of the peace talks is also threatening the negotiations and many rebel leaders are becoming restless and some have threatened to wage war if a peaceful settlement to the Bangsamoro problems is not settled soon.